In true "Wimpy Kid" fashion, the following is a diary chronicling my experiences in making “Diary of a Wimpy Kid,” the movie.

My movie "Hotel for Dogs" is in the final stages of post. I’m still recovering from shooting with a herd of animals and a whole ensemble of wild kids when producer Nina Jacobson shows me a book called "Diary of a Wimpy Kid."

It looks unlike any book I’ve ever seen. Greg Heffley’s experiences in middle school are handwritten on lined 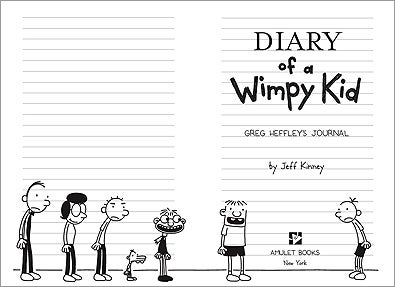 paper and illustrated with simple stick figure drawings that make me laugh out loud as I turn the pages. It feels fresh and honest. Also, it features a whole ensemble of wild kids. Do I really want to do this again?

I can’t get the Wimpy Diary out of my head. One day, as I clean out my office I discover why. In a box I find old notebooks I kept from fourth to sixth grade. They’re loaded with anecdotes and drawings akin to Heffley’s diary, illustrating my life in those days. There’s even drawn fantasy scenarios of fame and fortune. A realization grabs hold: Was I a wimpy kid myself?

I share my notebooks with Nina, producer Brad Simpson and the executives at Fox. I tell them this movie should feel like it sprung from the head of Greg Heffley — a totally subjective visual diary of how he perceives reality. I want to mix live-action and animation to illustrate Greg’s fantasies butting up against his harsh realities. Plus, it would be fun to see those stick figures animated to life. Everyone agrees. Now all we have to do is find our wimpy kid. Piece of cake!

After our first casting session, I know it’s going to be a long search. Greg Heffley has to be selfish, lazy AND make us care about him! Can we find an 11-year old who meets those demands and can carry a feature-length comedy? I storyboard the movie while finessing the script with the writers. The film starts playing back in my head, shot by shot.

Our casting has produced no Greg thus far. In addition to casting all over the country, we start an online search for the role. Kids can submit their own auditions at iamthewimpykid.com. Maybe we’ll pick our actor from the throng of "Wimpy Kid" enthusiasts. With my newly hired crew, I travel to Vancouver to scout locations. With the summer production date looming, there’s an urgency to cast the role of Greg, but we’re not desperate yet!

We are desperate. Some kids show promise, but screen tests reveal we haven’t found our Greg yet. Also, thousands of online submissions have yielded no winner. I fear there might not be that kid who can successfully embody the iconic stick figure. With the production on hold, some key crew members leave to take other jobs. Glancing at my storyboards, I fear this film might never become a reality.

Against all odds, our stick figure comes to life on a soundstage in West Hollywood. An 11-year-old named Zachary Gordon delivers Greg’s monologue with such intensity that I breathe a sigh of relief. The studio and producers agree, and Zach is cast as Greg Heffley. With summer vacation in full swing, we need to take advantage of the remaining weeks of empty schools to shoot in. We immediately start prepping for production.

While I’m rehearsing with the kids, my production team mounts our movie’s world. Much like the "Wimpy" books, I want the film to have a timeless feel. Rather than think about where and when Greg Heffley’s adventures unfold, I want our audience to focus on their enduring and universal appeal.

To that end, Oscar-nominated costume designer Monique Prudhomme creates an iconic wardrobe and production designer Brent Thomas builds sets that breathe with the life of their fictional inhabitants. Director of photography Jack Green and I discuss a lighting scheme we call "romantic childhood nostalgia."

Our first shooting day feels like trying on a new pair of shoes. Our kids are getting used to the mechanics of filming, while I try to set the tone for their performances. How big is too big? How small is still funny? Zach is dramatically inclined and needs to lighten some of his reactions. It’s in those early days that the movie’s tone feels very much in flux. I pore over dailies as if they’re X-rays determining my patient’s health.

The kids have found their footing and are having a blast. Every day brings new discoveries for them: Staying up 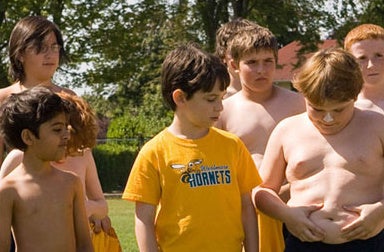 late to shoot in the woods, being suspended from wires in front of a green screen – they’re having the time of their lives. Robert Capron, who plays Greg’s friend Rowley, exclaims, "That’s awesome!" — when being fitted with an apron! It’s this infectious enthusiasm that energizes even the veterans among our crew.

But make no mistake: The schedule is breakneck. In 45 days, we shoot two to three pages each day, sometimes four! The kids’ work hours are limited to seven hours a day, so I have to know what I need and move on when I’ve got it.

After I say "Cut" on Robert’s last take, he buries his face in his hands. He doesn’t want our shoot to end. Tears are falling. The image of Zach hugging Robert to console him on our last day will stay with me forever. I realize then that our shoot was a seminal moment in all our young actors’ lives.

Karan Brar, who plays little Chirag Gupta, gives me a special parting gift: a self-made, illustrated Diary of the movie’s production – from the table read to everyone getting their Oscar! Hmm… Those drawn fantasies of fame and fortune feel familiar…

Our movie is locked and finished. It features a beautiful, rough-around-the-edges score by Theodore Shapiro and lively stick figures animated by Mike Murphy, my friend of 15 years.

And Karan’s drawn diary now shares a shelf with my own childhood diaries. Wimps of yesterday and today, continuing to illustrate moments lived and imagined.

BIO Thor Freudenthal
While in high school, Berlin-born Thor Freudenthal wrote and illustrated a series of comics for German publisher Carlsen, publisher of the Tintin series. He discovered his passion for film as a student at the Berlin Academy of Arts, and his self-produced short films garnered awards and accolades on the European festival circuit. While at visual effects house Sony Pictures Imageworks, Freudenthal worked closely with director Rob Minkoff on "Stuart Little" and "Stuart Little 2." After making the leap into directing with commercials, Freudenthal became second unit director on Disney’s "The Haunted Mansion." He then wrote and directed darkly comic short "Motel," which premiered at the Sundance Film Festival and won best short at the U.S. Comedy Arts Festival in Aspen. Freudenthal’s feature film directorial debut was "Hotel for Dogs" for DreamWorks.

While in high school, Berlin-born Thor Freudenthal wrote and illustrated a series of comics for German publisher Carlsen, publisher of the Tintin series. He discovered his passion for film as a student at the Berlin Academy of Arts, and his self-produced short films garnered awards and accolades on the European festival circuit. While at visual effects house Sony Pictures Imageworks, Freudenthal worked closely with director Rob Minkoff on "Stuart Little" and "Stuart Little 2." After making the leap into directing with commercials, Freudenthal became second unit director on Disney’s "The Haunted Mansion." He then wrote and directed darkly comic short "Motel," which premiered at the Sundance Film Festival and won best short at the U.S. Comedy Arts Festival in Aspen. Freudenthal’s feature film directorial debut was "Hotel for Dogs" for DreamWorks.
x