Dina Stars, an independent journalist and YouTube star who has been covering the protests in Cuba, was rounded up by police during a television appearance on Tuesday.

During her appearance on Spain’s Cuatro TV, she was speaking to Marta Flich when she announced in Spanish that state police were outside and she had to go see what was going on. Flich encouraged her to go while a commentator worried aloud she was about to be arrested on live television. Stars left her camera with a friend and the confrontation was subsequently captured on the feed, though Flich repeatedly encouraged the friend not to endanger herself in the process of recording it.

“We don’t know what’s going to happen now,” said Flich in Spanish just before Stars came back in the frame and said she was told to go with the police and would have her friends trail them to wherever she was taken. 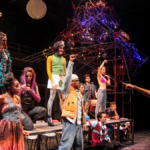 Stars has been actively covering the ongoing protests against Cuba’s government and the financial strains on Cubans, who are seeking access to healthcare and, in many protests, demanding government officials step down. On Twitter, her bio translates to, “Behind every woman there is a story that makes her a warrior.” She has 26,000 followers on that platform, 99,000 on Instagram and 36,000 on YouTube.

Florida Sen. Marco Rubio, whose own parents left Cuba for the United States before he was born, shared her story online, and he was not alone. Julie Chung, Acting Assistant Secretary for the Department of State’s Bureau of Western Hemisphere Affairs, wrote, “The world is watching Cuban authorities arrest & beat dozens of peaceful protesters & independent voices, including @DinaStars_. Many remain missing; we join their families & call for their immediate release. The repression must end, and the people’s voices must be heard.”