Discovery Communications reported its second-quarter 2017 earnings on Monday, immediately following news that the multi-cable channel home had agreed to buy Scripps Networks for $14.6 billion. The soon-to-be HGTV owner was initially set to share its Q2 financials on Aug. 8 — clearly, plans have changed.

Unfortunately, Wall Street had forecast EPS of 72 cents on $1.76 billion in revenue, per Yahoo Finance, meaning Discovery missed the mark at both its top and bottom-lines.

That’s the same direction company stock initially headed this morning. Here’s a snapshot of the first 15 minutes worth of open U.S. stock market trading on Monday: 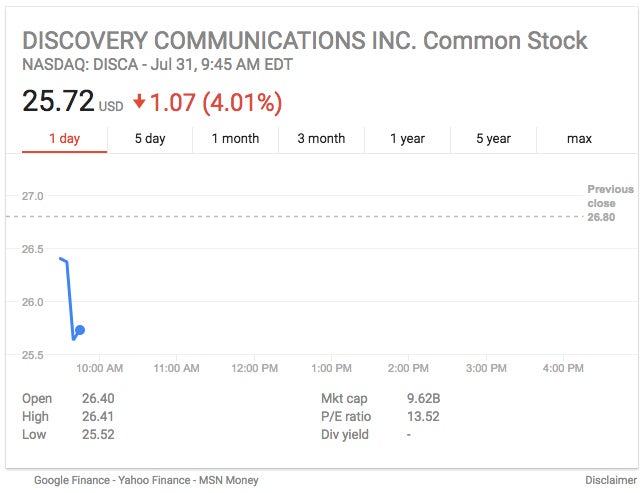 Also during the recently measured three-month period, Discovery’s U.S. networks saw revenue grow 2 percent, thanks to an uptick in distribution. Advertising here was effectively flat year over year, and there was a decline in stateside subscribers.

Offshore advertising at the TLC parent slipped 3 percent versus Q2 2016.

The cash and stock transaction to buy Scripps values SNI stock at $90 per share, and includes the assumption of Scripps’ debt. The transaction, which is expected to close by early 2018, is subject to approval by Discovery and Scripps’ shareholders, regulatory approvals, and other customary closing conditions.