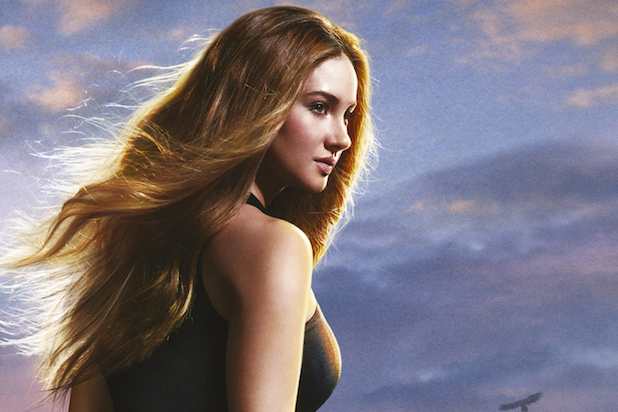 “Divergent” hits theaters Friday with the pre-release buzz positioning it as the successor to “The Hunger Games.”

Those are heavy expectations, and based on initial reviews, the adaptation of Veronica Roth‘s bestselling young adult novel labors under the weight.

Many critics have yet to chime in on the film, so the consensus could shift, but initial reviews for the picture are unkind, with many arguing that the film suffers in comparison to other futuristic fables. Currently, the film holds a 17 percent “rotten” rating on Rotten Tomatoes.

“Divergent” features rising star Shailene Woodley as Tris, a young woman who finds out that she will not fit into her dystopian society. It’s a view of the future in which people are cordoned-off based on their virtues and personality traits. The picture, directed by Neil Burger (“Limitless”), co-stars Kate Winslet and Theo James. The film may be review-proof; box office tracking is strong for the picture and the film is widely expected to dominate theaters when it opens Friday.

In TheWrap, Alonso Duralde groused that he suffered from a profound feeling of deja vu. The film’s premise and vision of an unforgiving future is cribbed from too many better movies and books, he argued.

“When Shakespeare rejiggered ‘Pyramus and Thisbe,’ it was 80 or so years after its first translation into English,” Duralde wrote. “It’s a classier move than stealing from characters whose ink is barely dry on the page.”

It’s all preamble, Variety’s Andrew Barker carped. The film exists as a launching pad for future sequels, instead of as a standalone movie.

“…Divergent’s’ uncertain sense of setting, bloated plot, drab visual style and solid yet underwhelming lead turns from Shailene Woodley and Theo James don’t necessarily make the best case for series newcomers,” Barker wrote. “Fans of the books will turn out for what should be a very profitable opening weekend, but with future installments already on the release calendar, the film’s B.O. tea leaves will surely be read with care.”

Forbes’ Scott Mendelson was more charitable, praising Woodley’s “terrific” lead performance and the film’s creation of a genuinely compelling heroine. Yet, he too faulted the picture for being exposition-laden. It’s all foreplay, he seemed to gripe.

“Considering there are only three books in the series, spending nearly a full film on what amounts to an origin story is a little frustrating. In that sense, it’s less ‘Batman Begins’ and more Ridley Scott‘s ‘Robin Hood,'” Mendelson wrote.

It’s all a bit dull, lamented Screen International’s Tim Grierson in a tepid assessment of the picture’s demerits.

“It’s not that ‘Divergent’ doesn’t have any provocative ideas,” he wrote. “Though somewhat generically executed, the film bemoans society’s encouragement of conformity and even works in a commentary about the evils of genocide. But because its thematic content mostly feels second-hand, ‘Divergent’ doesn’t stir the imagination.”

Though many critics bemoaned the film’s similarity to “The Hunger Games” and “Ender’s Game,” others praised its performances and adherence to its source material.

The Huffington Post’s Lisa Parkin said fans of the novel will love what Burger and company pulled off, while praising the casting of Woodley and James.

“I think book fans and dystopia lovers alike will be thrilled with this adaptation,” she wrote. “The ‘Divergent’ movie truly captures the spirit, adventure and excitement of the book, and I cannot wait to see again once it’s out.”

Todd Gilchrist was less caffeinated in his IndieWire review of the film, knocking it for being overly long. But he did credit it with being the second-best adaptation of a young adult favorite after “The Hunger Games.”

“Using Veronica Roth’s dystopian future as the foundation for a story of self-actualization, Burger succeeds in aping the cool proficiency of its obvious cinematic predecessor, ‘The Hunger Games,’ unfortunately without elevating Roth’s concept to more than an effective if slightly overwrought academic exercise,” Gilchrist wrote.

Of course, critics hated the “Twilight” films too, and audiences didn’t seem to care. Box office success can be the best revenge.