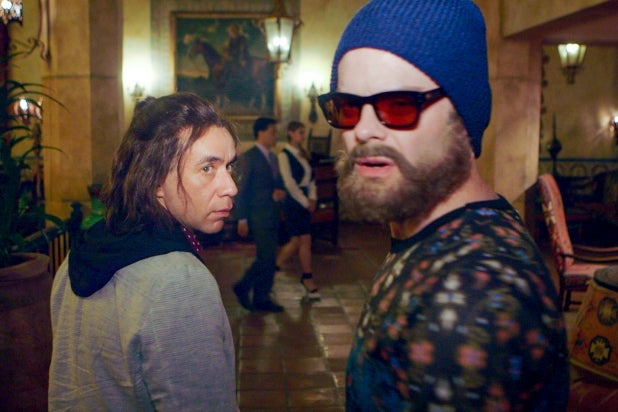 Although “Documentary Now!” would have probably been successful enough with its core audience simply by spoofing iconic nonfiction films, the great pleasure of this terrific series is how much wittier and shrewder its creators decided to go with their clever premise. Masterminds and “Saturday Night Live” alums Fred Armisen, Bill Hader and Seth Meyers have fashioned spot-on re-creations of indelible documentary styles–everything from the cinéma vérité of “Grey Gardens” to the macho investigative journalism of Vice–and then laced them with a twist, entertainingly digging deeper to offer striking commentary on the nonfiction format and its tension between truth and tone. Fans of the three comics will surely be on board, but the nerdy film love that permeates every frame of “Documentary Now!” may make it a hit with cinephiles, too.

Debuting August 20 on IFC–the network has already made one episode available on its website and on-demand–“Documentary Now!” is built around the conceit that this is the 50th anniversary of the acclaimed titular American television series devoted to the best of nonfiction filmmaking. Hosted by Helen Mirren with crisp English authority, each of the show’s six episodes looks back at a particularly momentous documentary, with Armisen and Hader serving as the central performers in these faux-real films.

Judged by three installments screened for critics, “Documentary Now!” is a wizardly amalgam of its creators’ best individual attributes. The writing, handled by “Late Night” host Meyers in two of the first three episodes, embodies the fizzy pleasures of a deft “SNL” skit, and the show’s look, provided by directors Rhys Thomas (also a co-creator) and Alex Buono, exhibits the same ingenious visual faithfulness that the two men brought to their filmed “SNL” segments, which often paid homage to specific cinematic and television styles. Additionally, Hader’s gift for brilliant impressions is allowed to flower, while Armisen’s knack at satirizing smug trendiness, a highlight of his show “Portlandia,” is on display as well. “Documentary Now!” is certainly in these men’s comedic wheelhouse, but the show is often funnier and more surprising than it initially appears.

That tendency is established in the first episode, “Sandy Passage,” an immaculate sendup of the 1975 documentary “Grey Gardens,” with Armisen and Hader playing lightly fictionalized versions of that film’s “Big Edie” and “Little Edie” Beale, the eccentric mother-and-sister pair living in squalor in a crumbling East Hampton house. At first, one simply admires the meticulous reproduction of the original film’s credits and handheld, grainy 16mm visuals–to say nothing of the two actors’ cheeky mimicking of the women’s odd behavior. But soon, the episode evolves from wry parody into something eerier that shouldn’t be revealed. Suffice it to say, “Sandy Passage” sets the bar high for the rest of the series, dovetailing its vérité setup into another form of filmmaking that, inventively, comments on how we perceive “reality” in documentaries.

As “Documentary Now!” moves along, the show continues to spring narrative twists, never sacrificing laughs for the sake of some finely-honed observations. “DRONEZ: The Hunt for El Chingon” is a scathing takedown of Vice’s aggressively chest-pounding investigative pieces, casting Armisen and Hader as self-righteous activist journalists traveling south of the border to track down a dangerous Mexican drug lord. Not only is the episode an hilarious imitation of Vice’s in-your-face aesthetic, “The Hunt” feels achingly right, a perfect zeitgeist-skewering commentary on the solipsistic, self-congratulatory nature of so much contemporary change-the-world journalism.

In comparison, “Kunuk Uncovered” may seem rather tame, a spoof of the silent documentary of Inuit life “Nanook of the North,” but it too bobs and weaves past its initial premise to double as both a goof on dull PBS specials and a sharp existential riff on a serious topic among nonfiction filmmakers: how the presence of a camera affects the subject being filmed.

At about 22 minutes each, these episodes are just long enough to develop comically and dramatically without the central conceit wearing out its welcome. There are plenty of geeky cinematic details being referenced to delight film fans, but “Documentary Now!” exudes such a freewheeling, anything-goes spirit that it’s clear that the show has provided a springboard for its creators to sound off on everything from politics to intolerance to the very nature of creative expression–one they’ll be able to continue to take advantage of, as the series has already been renewed for two more seasons. “Documentary Now!” is so wonderfully silly it may take viewers a moment to recognize just how smart it is, too.