Former President Donald Trump told his then-chief of staff John Kelly that “Hitler did a lot of good things,” according to a new book on the Trump presidency and his failed 2020 reelection bid.

According to Michael Bender’s “Frankly, We Did Win This Election,” due out next week, Trump was in Europe in 2018 to celebrate the 100-year anniversary of the end of World War I when he made the comment that “stunned” Kelly.

The Guardian published the latest nugget from the book on Wednesday, reporting that, per Bender, Kelly was telling Trump “which countries were on which side during the conflict” and connecting “the dots from the first world war to the second world war and all of Hitler’s atrocities” at the time. 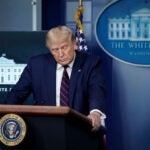 A spokesperson for Trump told the Guardian, “This is totally false. President Trump never said this. It is made-up fake news, probably by a general who was incompetent and was fired.”

Trump has previously attacked Kelly and suggested the former chief of staff was behind anonymously sourced reports about him. In 2020, the Atlantic published a piece saying Trump described soldiers who died in battle as “suckers” and “losers.” Pressed about the report shortly after its publication, Trump disparaged Kelly, who had not come forward to deny the report, and suggested that a “guy like John Kelly” could have been one of the anonymous sources.

“I know John Kelly. He was with me, didn’t do a good job, had no temperament and ultimately he was petered out, he was exhausted. This man was totally exhausted. He wasn’t even able to function in the last number of months. He was not able to function. He was sort of a tough guy. By the time he got eaten up in this world, it’s a different world than he was used to, he was unable to function,” Trump said at the time. “I don’t know that it was him. I haven’t seen that. I see anonymous, but it could have been a guy like a John Kelly. He was a very — you look at some of his news conferences, what happened to him, he got eaten alive. He was unable to handle the pressure of this job.”