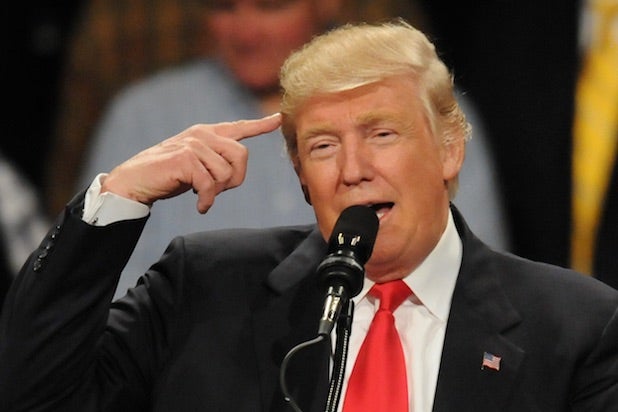 Though president-elect Donald Trump didn’t watch the Golden Globes Sunday evening, he did have a response to the pronounced liberal bent of the first major awards show of the year.

Trump, speaking to The New York Times Sunday night, said he was “not surprised” that “liberal movie people” would complain about him. He referred to Meryl Streep in particular as a “Hillary lover” — Streep dedicated a large portion of her acceptance speech for the Cecil B. DeMille lifetime achievement award to deriding Trump.

“It was that moment when the person asking to sit in the most respected seat in our country imitated a disabled reporter, someone he outranked in privilege, power, and the capacity to fight back,” Streep said, referring to an incident during one of Trump’s campaign speeches in 2015. “It kind of broke my heart when I saw it. I still can’t get it out of my head because it wasn’t in a movie. It was real life.”

“[This] instinct to humiliate, when it’s modeled by someone in the public platform, by someone powerful, it filters down into everybody’s life, because it kind of gives permission for other people to do the same thing,” the actress continued.

“Disrespect invites disrespect. Violence incites violence. And when the powerful use their position to bully others, we all lose.”

Trump denied to the Times that he was mocking the disability of the reporter, Serge F. Kovaleski.

“I was calling into question a reporter who had gotten nervous because he had changed his story,” he said, arguing that Kovaleski had tried to backtrack on a story. “People keep saying I intended to mock the reporter’s disability, as if Meryl Streep and others could read my mind, and I did no such thing.”

He also noted that Streep had introduced Clinton at the Democratic National Convention. Though his team has has had trouble booking A-list talent for his inauguration — another sign of his difficult relationship with many in the entertainment industry — he said people would be surprised.

“We are going to have an unbelievable, perhaps record-setting turnout for the inauguration, and there will be plenty of movie and entertainment stars,” Trump told the Times. “All the dress shops are sold out in Washington. It’s hard to find a great dress for this inauguration.”

Streep’s comments may have been the loudest but were far from the only Trump bashing that occurred during the Golden Globes. Host Jimmy Fallon repeatedly made sarcastic comments about the state of the world in Trump’s America — though he only used Trump’s name once.

Hugh Laurie, accepting the award for Best Performance by an Actor in a Series, Limited Series, or Motion Picture Made for Television, spent fifteen seconds of his speech joking about how this was the “last-ever” Golden Globes because the incoming government would probably want to shut down an organization with the words “Hollywood,” “foreign” or “press” in its name. The Golden Globes are, of course, put on by the Hollywood Foreign Press Association.