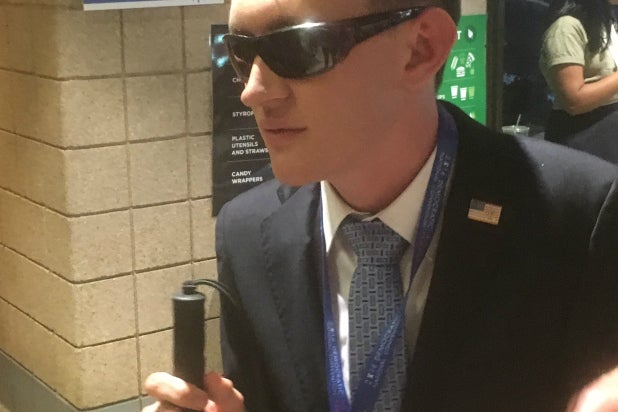 On Tuesday, the 26th anniversary of the Americans With Disabilities Act, former Sen. Tom Harkin used sign language as he spoke at the Democratic Convention podium in Philadelphia. A blind singer sang the National Anthem to the delegates. A paralympic swimmer led the Pledge of Allegiance from her wheelchair.

Democrats used the anniversary to repeatedly show how they support people with disabilities. Meanwhile, on Monday night, they played a video from November in which Donald Trump appeared to mock the muscular disability of New York Times reporter Serge F. Kovaleski.

Bill Clinton also hit on that contrast late Tuesday night as he talked about his wife’s early work for children, including those with disabilities.

“She never made fun of people with disabilities,” the former president said of his wife. “She tried to empower them based on their ability.”

The Americans With Disabilities Act was passed with bipartisan support and signed by a Republican president, George Bush, on July 26, 1990. It was amended in 2008 and then signed by his son, George W. Bush. But at the Democratic Convention, many made the case that the new Republican nominee, Trump, would be much less helpful to the disabled.

The narrative is an attempt to appeal to people with disabilities and their loved ones, but also to suggest that Trump has a general lack of compassion.

Timmy Kelly, the Philadelphia singer who led the Wells Fargo Center in the “Star-Spangled Banner” on Tuesday, said Clinton personally asked him to sing the National Anthem at the convention a year ago, when he sang at her campaign launch in 2015.

Kelly, who studies music at Temple University, performs the National Anthem for the Philadelphia Eagles. Former U.S. Rep. Tony Coelho, a Democrat and primary sponsor of the act, happens to be an Eagles season ticket holder, Kelly told TheWrap.

“Hillary Clinton asked him to get somebody with a disability that could sing the National Anthem at her presidential launch campaign, and since he saw me sing at the Eagles, he contacted them to get ahold of me. So after I was done singing for her, all I said was, ‘Secretary Clinton, I’d love to sing for you if you come to Temple University,'” Kelly said.

“She said, ‘Hold on … I want Timmy to sing for me at the DNC in Philly,'” Kelly continued. “And three days later I got a personal letter from her written on official letter stationary, and it said, ‘See you in Philly, Hillary.’ A year later, here we are.

“I feel like she is a champion for people with disabilities,” added Kelly, who was born blind. “She understands the middle class. I’ve met her, she’s genuine, and that’s a lot of great qualities that you want in your next president.”

So what does Kelly think of Trump?

“As a person with a disability when he mocked the reporter … that really, really hurt me,” Kelly said. “For me, I don’t want someone like that for the next president. You can’t have someone mocking people just because they’re different from him.”