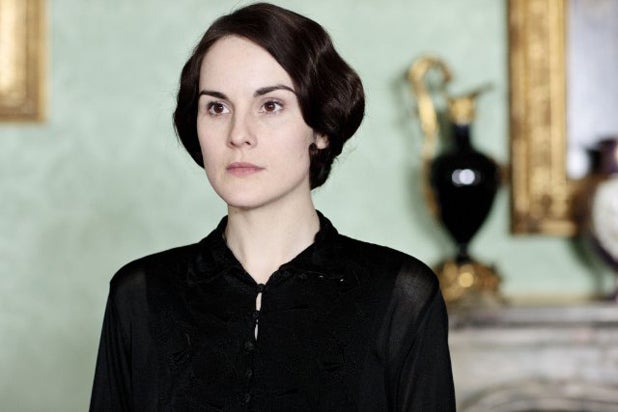 Times are changing, we constantly hear during Season 4 of “Downton Abbey,” but you wouldn’t really know it from the characters themselves.

The upstairs and downstairs folk at Downton behave pretty much as we’ve come to know and expect they will in the season getting underway Sunday on PBS.

Julian Fellowes‘ upper crust soap picks up six months after Matthew Crawley’s death with Lady Mary (Michelle Dockery) near catatonic with grief, yet somehow able to attract a trio of suitors in short order. She claims to have been changed by her love for Matthew, but seems as aloof and severe as ever and hardly a candidate for mother of the year.

Poor Daisy and Lady Edith remain unlucky in love, and Cousin Isobel (Penelope Wilton) continues to clash with the Dowager Countess (the incomparable Maggie Smith, once again delivering many of the show’s best lines) over her passion for do-goodery.

As for the estate ownership issue that powered so much drama in previous seasons? Let’s just say it’s the plot point that keeps on giving in “Downton Abbey.”

These familiar elements are part of the show’s appeal, but are also starting to become a problem. There are only so many times characters can face the same obstacles without the show turning into a soapy 1920s version of “Groundhog Day” or a fatalistic downer.

“Sometimes I feel that God doesn’t want me to happy,” Lady Edith (Laura Carmichael) confides to the Dowager Countess at one point.

“My dear,” her grandmother responds. “All of life is a series of problems that we must try and solve. First one, and the next and the next until we die.”

That response does not bode well for Lady Edith’s problem-plagued romance with Michael Gregson, who mysteriously disappears for part of the season.

Peripheral characters such as Molesley, Matthew’s former valet, also undergo endless humiliations as a form of comic relief. Would Cousin Isobel, usually so eager to help the downtrodden, really be so overcome with grief that she would decline to give poor Molesley a job in the early going? She helps at least two others this season and Molesley once served Matthew, her only son.

But if she did help Molesley, his character couldn’t stick to his prescribed role as a sad sack whose attempts to better himself are continually undone.

Star-crossed lovers Anna (Joanne Froggatt) and Mr. Bates (Brendan Coyle) endure another serious challenge to their relationship this season, and while Anna’s misfortune and the subsequent rift between her and Mr. Bates seemed a bit heavy handed, it at least spared us more scenes of them mooning over each other.

Fun loving Rose (Lily James) brings race into the picture when she befriends a black jazz musician (Gary Carr), and the show manages to handle the characters’ response to it with sensitivity and occasional wit. The show also continues to address the financial concerns of the landed gentry after World War I as a serious concern but not without its comedic aspects: The Crawleys’ attempts to diversify with pigs prompts many an amusing query about their progress, and leads to a mud-filled escapade with Lady Mary and one of her suitors.

Modern technology is also played for laughs, with the tradition-minded contingent downstairs eying a new electric mixer and sewing machine with deep suspicion.

Alas, the much anticipated face-off between Shirley MacLaine and Maggie Smith as dueling grandmothers won’t take place until the end of the season in an episode not made available for preview. (That episode recently aired as a Christmas special in the U.K.)

Despite the occasional creakiness and lapses into melodrama “Downton Abbey” remains a show to watch, notable for its dreamy production values and the real depth of feeling it portrays between the classes. When Mr. Carson tries to shake Lady Mary out of her grief, only to be dressed down for it, the pain shines through Jim Carter’s eyes. It’s moments like those — and the Dowager Countess’s ripostes — that “Downton Abbey” fans lap up as readily as heavily clotted cream.