Jimmy Kimmel had his hands full on Thursday night.

As Kanye West was hate-calling him and throwing a temper tantrum at him on Twitter, Kimmel simultaneously had two other balls in the air. One of them was a deep-fried risotto ball.

Old pal Adam Carolla joined in as co-host for the calorie carnival celebrating Italian heritage. On this night, it included an autographed photo of the late James Gandolfini up for grabs as part of the fundraiser.

The feast opens to all civilian non-Kanye targets this weekend in Hollywood. (Photo by Kayte Deioma) 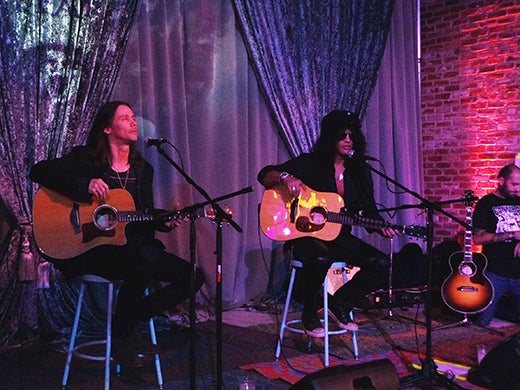 “I feel like I’m playing in a high school auditorium,” Slash said as he took a stool to strum acoustically for 150 friends in Hollywood on Wednesday night.

If the confines on the patio at Umami Burger felt comfy, it might be because the legendary guitarist is now big time in another medium. Following everyone else he grew up with in Los Angeles, Slash is now a film producer.

“This is my production debut,” he introduced two hours earlier, before premiering “Nothing Left to Fear” on screen 14 at the Arclight across the street.

While he wasn’t on set every day for the thriller shot in Louisiana, the hatted-one scored and produced the film’s soundtrack. His creepy guitar riffs sound like the Slash of yore and the title track sounds like the band Staind. Both are a highlight of the horror show. “Axl who?” one woman in the front row yelled out. 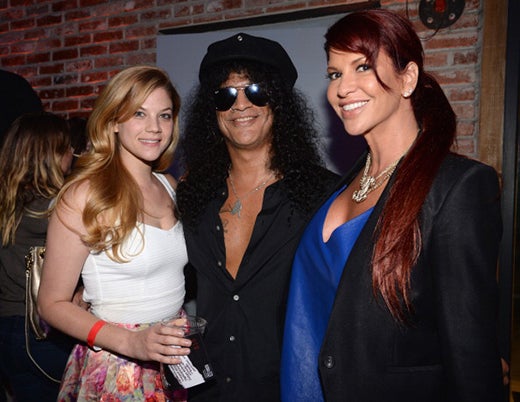 Slash (and frequent collaborator Myles Kennedy, calling themselves “lounge lizards” on Wednesday) chatted from the stage with wife Perla, improvised an encore on the fly, and played six songs total for a crowd that included original Guns N’ Roses drummer Steven Adler (healthy, in a Stones t-shirt) and Clifton Collins Jr. Have a look at the highlight: “Sweet Child O’ Mine.” 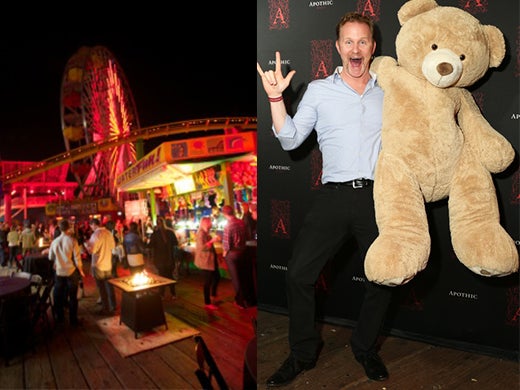 “We need to get you your smurf and dragon,” a host told Morgan Spurlock, suggesting he round out his trophy case of stuffed souvenirs from an after-hours trip to the Santa Monica Pier on Tuesday night.

CNN’s “Inside Man” landed on the inside of the closed-down, private, after-dark night for about 175 of L.A.’s insiders to preview Apothic Dark, a new limited edition wine.

What began as a wine tasting party shrouded in darkness over the ocean illuminated at 9:00 p.m. as they flipped the switch on the traditional games and rides. “This is the most people from L.A. that have ever been here,” a ride operator confirmed of the night that had been billed on the invitation as “tourist-free”. 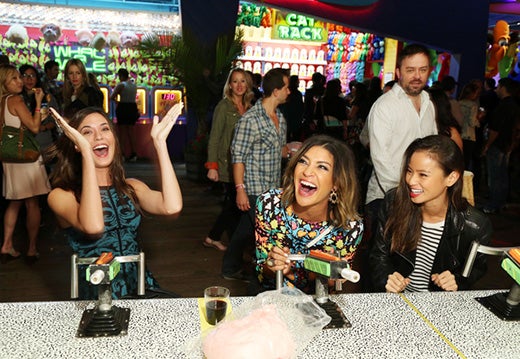 Odette Annable (left) vanquished Jessica Szohr (who said she felt like she was “on a set”), and Jamie Chung in a water gun battle. (Photos by Sara Jaye Weiss/Startracks). 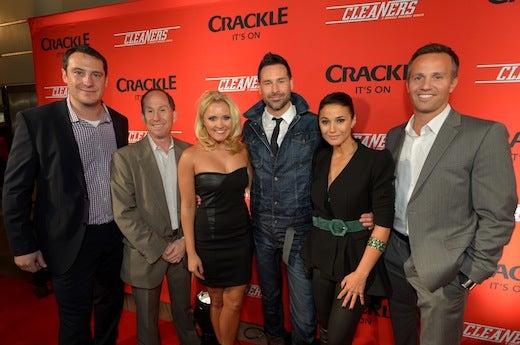 Former “Hannah Montana” star Emily Osment and Emmanuelle Chriqui are getting in to the contract killing business.

Their new online series “Cleaners” debuted at Sony Studios on Thursday night. If you’re new to a digital series premiere, it’s like a shorts package at a festival – you get the first four episodes.

Following Netflix’s binge-release model, all episodes are available on October 3.