Thirty years ago, 20 million Americans across the country rallied for the first time in peaceful demonstrations in favor of environmental reform known as Earth Day.

Today, as the Trump administration slashes the EPA and denies climate change, more than 190 countries made their voices heard in the March for Science. Those who couldn’t make it to the streets, took to social media. Among those famous names speaking out: Leonardo DiCaprio, the Clintons and Pope Francis.

“Lord, bring healing to our lives, that we may protect the world and not prey on it, that we may sow beauty, not pollution and destruction,” the leader of the Roman Catholic Church wrote.

Chelsea Clinton chose to take a pop culture-friendly look at the events, commenting on a sign one marcher was carrying that tweaked a quote from “The Princess Bride.”

And Leonard DiCaprio, known as much for his environmental activism as for his acting, merely tweeted “get informed.”

Here are but a few of the notable figures who joined in on this day of awareness.

This Earth Day we need a greater sense of global responsibility based on our belonging to one human family.

Lord, bring healing to our lives, that we may protect the world and not prey on it, that we may sow beauty, not pollution and destruction. 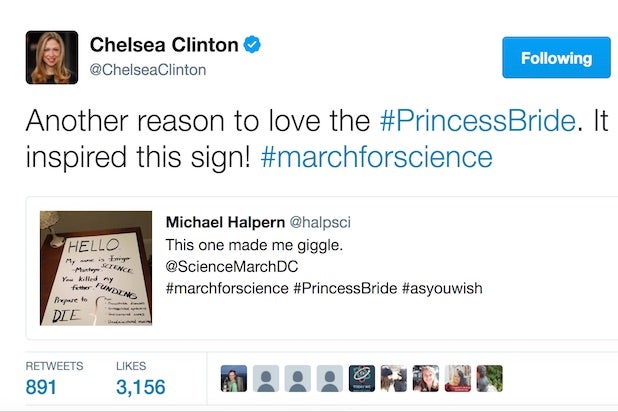 This #EarthDay, get informed. https://t.co/hXDNTqqIIU

Sending love and gratitude to everyone at the #MarchForScience today!!!!! Thank you for standing up for TRUTH.

Keeping the earth clean, healthy and safe isn't a political issue. It's our duty to the next generation. #HAPPYEARTHDAY pic.twitter.com/mW8rntguh0

#EarthDay! The day we remember the infinite blessings the planet has bestowed on us, the most ungrateful of all her species!

I couldn't make it to the main science march in DC BUT I have the honor of being the MC for the Silicon Valley Science March tomorrow! https://t.co/08LszUTqfR

A shout out to all those today who #MarchForScience. The truth is out there. Embrace it. Cherish it. Protect it.

welcoming in earth day like, "ain't every day about this beautiful mama?!" https://t.co/JqEFtks8h0

We live in an age where a pro-science march is considered a political statement. #marchforscience #EarthDay

Today, we're at the #MarchForScience promoting the progress of science and the useful arts of engineering. pic.twitter.com/VJJKSMahD3

My next film is about science and earth. Celebrating today's #MarchforScience + #EarthDay with @ClintSmithIII's gem. pic.twitter.com/e8KBS5AaH3

Thousands across the U.S. and the globe march for science in defiance of Trump https://t.co/C8HrSJjeFw # via @HuffPostPol

You're a flower on this beautiful planet ???? https://t.co/netVrgnrw8