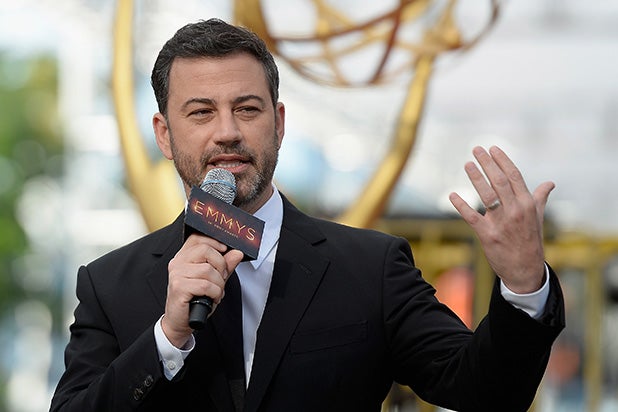 The opening segment also featured a bit with “Ozark” star Jason Batemen as the only real person amid a crowd of MLB-inspired cardboard cutouts, and another with “Morning Show” star and Emmys presenter Jennifer Aniston as a humorous way of explaining the night’s unique at-home format.

"Television is there for you. The world may be terrible but TV has never been better." – @jimmykimmel opens up the 2020 #Emmys. https://t.co/pntfV2hzyR pic.twitter.com/tzNftnoINS

“We’ve been confined to our homes like prisoners in a dark and lonely tunnel. What did we find in that dark, lonely tunnel? I’ll tell you what we found. A friend who is there for us 24 hours a day. Our old pal television. That’s right. Television is your friend. It’s your Friends, your Big Brother, your Sister, Sister, your Mama’s Family, your two dads, your three sons, your Crazy Ex-Girlfriend. It’s even your Dog, the Bounty Hunter, through the Good Times and the Breaking Bad’s for every day of your 600 Pound Life. Television is there for you.”

“Hats off to the television visionary Norman Lear, who this week became the oldest winner ever at age 98. Norman didn’t grow up dreaming of winning Emmys. In fact, television wasn’t even something people had until he was a teenager. When Norman was a boy, his dream was to not get kicked to death by a horse.”

“Of course we don’t have an audience. This isn’t a MAGA rally. It’s the Emmys.”