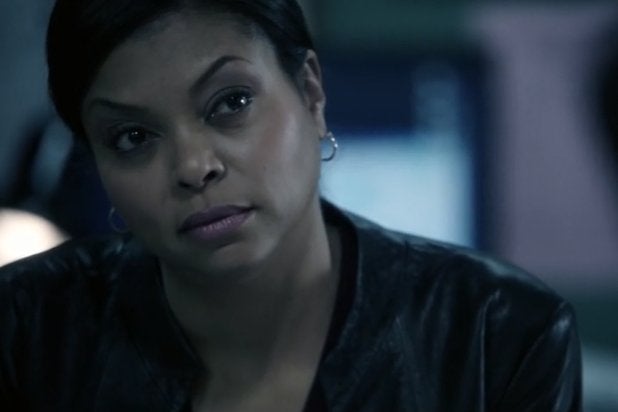 (Spoiler alert: Do not read on if you have not yet seen Tuesday night’s episode of “Person of Interest” on CBS entitled “Terra Incognita.”)

It’s been nearly a year-and-a-half since the breakout star of Fox’s “Empire,” Taraji P. Henson‘s Detective died on CBS’s “Person of Interest.” She was a pivotal character through the first three seasons’ of the crime procedural, building a connection to Jim Caviezel’s stoic Mr. Reese and the mysterious Mr. Finch (Michael Emerson).

Over time, she became a trusted member of their team, working with Reese and her hapless partner Det. Fusco (Kevin Chapman) to track down people targeted by “the machine” to either save them or stop them from some kind of violent or criminal action.

But it was never her acumen as an officer that mattered in the show — it was the heart she showed. In a series about a cold and distant man working with a mysterious and distant man, audiences needed someone to latch onto and that someone was Detective . She was tough and compassionate, but showed a greater depth of emotion than usually seen on these types of shows.

It was these qualities and more that made her the breakout star of “Empire,” and it was what she brought in her “POI” return. There was a nice twist toward the end of the episode that left viewers questioning everything they’d seen so far, while emphasizing her importance to Reese and the show.

The episode opened with Reese and Finch on a stakeout, joined by . But rather than focus on the perpetrator-or-victim, as most episodes do, this installment instead stayed with and Reese in the car as the stakeout progressed through the night.

These were the quieter moments between the characters that viewers never get to see episode-by-episode. Here is Reese actually opening up to a bit about his life before Finch found him desperate and homeless, talking about the woman he’d loved and left behind. It’s a level of character development and nuance CBS procedurals almost never bother with.

And as it turns out, they didn’t here either. In a shocking twist, revealed later that none of this was real. The clues were there all along. Reese kept turning up the heat because he was freezing in the car. But he wasn’t in the car with her on that stakeout a few years back.

He was in a car in the middle of nowhere freezing to death all alone right now. was just a hallucination as he slipped deeper and deeper into hypothermia.

Henson got to pull double-duty in the episode, also appearing in flashbacks to one of her first-ever cases about a young man who came home to find his entire family had been murdered. His was the number that came up in the present day, leading Reese to follow in ‘s footsteps.

There were some well-edited and directed sequences as we shifted from the past to the present in the same settings. The past was presented in a softer view, juxtaposing with the harsh reality of the present day. Even more significant, while ‘s flashbacks were filled with people, the quick shifts to Reese more often than not saw him alone or mostly alone.

This was ‘s final message to Reese as he lay dying in that car. He was alone up there because he chose to be alone. He had people all around him and he never opened up to them. He told her that he cared deeply for her and he swore he’d opened up to her, but she insisted that he never had. Did he really believe he had?

had such a strong impact on Reese during the time they knew one another that it was her voice and face he pulled out of his own fracturing psyche to motivate him and push him to stay alive.

As guest appearances go, it was certainly one of the more powerful ones, and easily the most emotionally resonant episode “Person of Interest” has ever done. It proves that Henson was capable of far more depth than the CBS crime procedural model allowed her — which she continues to prove in a much more in-your-face way as Cookie Lyon on “Empire.”

Subtle or brash, Henson is a powerful performer who is finally getting her due after too many years in the trenches. It was smart of CBS to get her back on “Person of Interest” so shortly after “Empire” wrapped its first season. Perhaps they regret letting her go, even if she was woefully underutilized.

Perhaps even more importantly, this episode could well prove a turning point for the series itself. Dysfunctional as it may be, Reese, Finch, Fusco and now Root (Amy Acker) are a kind of family. Sure, one that tracks down seemingly random people and then either saves them from some kind of trouble or stops them from creating trouble, but a family nevertheless.

They even have a dog.

If the show can be as much about these characters and what they mean to one another as it is about the number of the week, that could help it appeal to a wider audience. “Empire” fans tuning in were surely impressed with how well executed “Terra Incognita” was from conception to writing and direction.

Hopefully the show continues to push itself creatively, and Reese takes the time to tell someone still alive about the woman he left behind. As the closing moments proved, he’s not alone, even if is gone.