“Mayor Garcetti tested positive for COVID-19 earlier today. He is feeling good and isolating in his hotel room. He is fully vaccinated,” said a tweet from Garcetti’s official account.

Garcetti, who is currently in Scotland for a United Nations conference on climate change, was supposed to moderate a panel on Wednesday. The topic was international financial support for city-level climate initiatives. He was then supposed to participate in a second discussion on solutions to climate change. 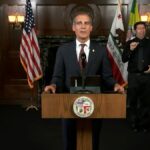 The mayor was vaccinated early in the year, making his case a so-called breakthrough infection.

Garcetti was nominated by President Joe Biden to be ambassador to India earlier this summer. There is still no timeline for his Senate confirmation hearing. He said at the time that he remained committed to leading Los Angeles “like it is [his] first day on the job.”

“I have committed my life to service –– as an activist, as a teacher, as a naval officer, as a public servant, and if confirmed, next as an ambassador. Part of that commitment means that when your nation calls, you answer that call. And should I be confirmed, I’ll bring this same energy, commitment, and love for this city to my new role and will forge partnerships and connections that will help strengthen Los Angeles’ place on the world stage,” he said at the time.