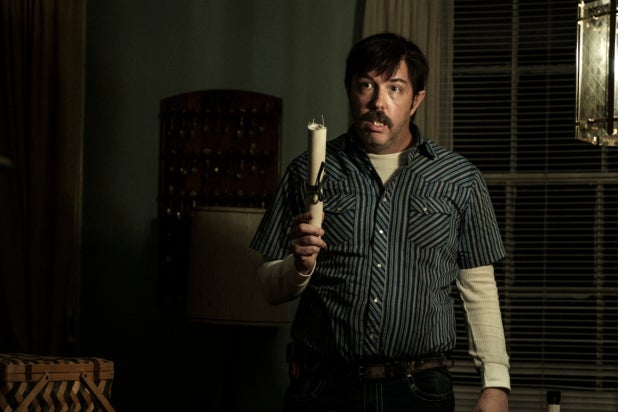 Showtime’s limited series “Escape at Dannemora” focuses on real-life escaped convicts Richard Matt (Benicio del Toro) and David Sweat (Paul Dano) and the prison worker who aided their escape, Joyce “Tilly” Mitchell (Patricia Arquette). But when you have a pair of hardened criminals and the woman who is carrying on an affair with both of them, it’s hard to figure out who the viewers should be rooting for.

That’s where Lyle Mitchell, the unaware husband of Joyce, comes in. “He’s very much a sympathetic character in the show,” Eric Lange, who plays Lyle, tells TheWrap, describing him as the “human cost of this tabloid-sensationalized thing.”

Lyle was one of the people involved in the ordeal who the show’s producers never got to speak with, co-showrunners Brett Johnson and Michael Tolkin had previously told TheWrap. Which makes sense. After all, would you want to speak about one of the most embarrassing moments of your life: finding out your wife of 21 years was not only sleeping with two prisoners but also aided in their escape and might have even plotted to kill you?

“He’s like shrapnel in all of this,” Lange continued. “He’s one of the big victims in this whole story.”

The limited series, which is directed and executive produced by Ben Stiller, is based on the 2015 prison break from Clinton Correctional Facility by Matt and Sweat. The two escapees — both convicted murderers — broke out of the Upstate New York facility, aided by Joyce “Tilly” Mitchell, who reportedly carried on affairs with both men while supervising them in the tailor shop. It spawned the largest manhunt in the history of New York State.

The real Lyle Mitchell has only spoken once about it, in a 2015 interview with “Today” show. “I’ll never forget watching it and feeling so sorry for him. He genuinely seemed confused and angry,” Lange continued. “It was just so embarrassing on so many levels for him.”

Lange had to rely mostly on that one interview to help him capture Lyle’s speech patterns and facial tics, but also got information through stories from other people that work at the prison that knew him.

“We got to tour the prison [which is still in operation] when we first started production, so all the guards that I met I would ask, ‘Did you know Lyle?'” Lange said. “And all of them did, and all of them told me a little something about him.” He added that a lot of background actors for the show were also from the area. “They all had a story.”

Also Read: 'Escape at Dannemora': Did Richard Matt Really Have a Photo of Hillary Clinton in His Jail Cell?

The series paints Lyle as being mostly unaware of what his wife is up to, even if he does appear suspicious at times. But Lange explains that love can make you do crazy things, like look the other way when your wife might be sleeping with inmates and helping them break out of a maximum security prison.

“The great question is how much does he know? And how much is he going to let anyone else know he knows?” Lange said. “Love is deaf, dumb and blind.”

“Escape at Dannemora” airs Sundays on Showtime at 10 p.m. ET/PT