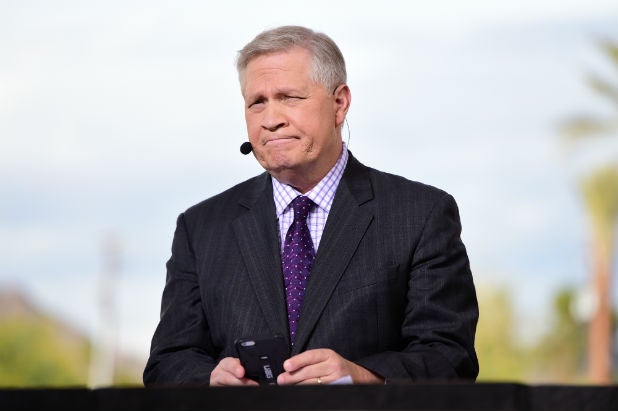 ESPN analyst Chris Mortensen was not keen to enter enemy territory on Friday.

The NFL expert was scheduled to appear on Boston radio talk show “Dennis & Callahan” on WEEI to discuss his January report about the New England Patriots that was later debunked, according to multiple media outlets.

“You guys made a mistake by drumming up business for the show and how I would address my reporting for the first time,” Mortensen told WEEI. “I will not allow WEEI, [Patriots owner Robert] Kraft or anybody to make me the centerpiece of a story that has been misreported far beyond anything I did in the first 48 hours. Maybe when the lawsuit is settled, in Brady’s favor, I hope, we can revisit. Don’t call.”

Mortensen’s initial report in January stating the NFL found that the Patriots used 11 footballs that were each under-inflated by two pounds per square inch in their 45-7 win over the Indianapolis Colts in the  2014 AFC Championship game (which led them on the road to Super Bowl victory), kicked off the Deflategate scandal that landed Brady a four-game suspension and sparked a legal battle between the star QB and the NFL.

The report and the information leaked to the award-winning sports journalist by a source has since been proven false, but the scandal has since spiraled out of control faster than a perfect throw from Brady, leading to an in-depth investigation from independent investigator Ted Wells.

Based on the subsequent Wells Report and the evidence presented at the hearing, Commissioner Goodell concluded in his decision that Brady was aware of, and took steps to support‎, the actions of other team employees to deflate game footballs below the levels called for by the NFL’s official rules.

On Tuesday, NFL Commissioner Roger Goodell upheld the four-game suspension imposed on the Super Bowl MVP. Brady, however, continues to deny the allegations and wrote a passionate Facebook post as a response to the ruling.

“I am very disappointed by the NFL’s decision to uphold the 4 game suspension against me. I did nothing wrong, and no one in the Patriots organization did either,” he wrote Wednesday. “The fact is that neither I, nor any equipment person, did anything of which we have been accused. [Commissioner Gooddell] dismissed my hours of testimony and it is disappointing that he found it unreliable.”

While Mortensen wasn’t in Boston on Friday, Brady was back at Gillette Stadium in Foxborough for the first week of Patriots training camp, surrounded by fans holding up “Free Brady” banners.