ESPN has finally canceled “Highly Questionable,” which continued on after co-creator and host Dan Le Batard left ESPN in January.

The show will morph into a digital series, titled “Debatable,” on Oct. 4. Every weekday, a new 45-60-minute episode will debut exclusively on ESPN’s Twitter, Facebook and YouTube accounts and the ESPN App. It will be the first series that ESPN has launched in that model.

“Debatable” will feature the rotating cast from “Highly Questionable” taking on “the most compelling topics from around the sports world with even greater depth and digression,” ESPN said on Thursday.

More details on “Debatable” will be announced soon, the cable channel promised. 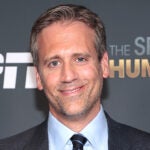 The final “Highly Questionable” airs tomorrow at 2:30 p.m. on ESPN2.

“Highly Questionable” launched in 2011 as “Dan Le Batard Is Highly Questionable.” The format was similar to “PTI,” which makes sense because it was created by the “Pardon the Interruption” team and Le Batard (pictured above, right), a regular fill-in host on the popular Michael Wilbon and Tony Kornheiser-hosted afternoon sports talk and debate show. 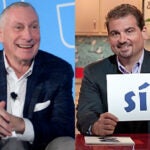 “This Just In,” a live, one-hour show, will provide all the latest news, opinion and analysis on the day’s trending and under-the-radar afternoon headlines and look ahead at potential news-making moments that evening, according to ESPN. Kellerman will also regularly be joined by ESPN’s industry-leading lineup of sport-specific insiders and analysts to go inside every breaking story and development from new angles, the cable channel continued its description of the program.

Kellerman left “First Take” in late August. He will be filling his mornings as the third host of ESPN Radio’s morning talk show, which has been retitled to “Keyshawn, JWill & Max.” Kellerman will also continue to host the weekly boxing show “Max on Boxing” on ESPN2.