The long-running “Fallout” video game franchise is getting a TV series adaptation via Amazon Prime, and on Thanksgiving day star Ella Purnell gave fans something to be thankful for: The first image from the show.

If you haven’t played the games, “Fallout” is a role playing action game series taking place at various points in the future, decades after a nuclear war in 2077 devastated the world and destroyed the United States. Each game focuses on a customizable player character descended from survivors who escaped the war by hiding in shelters called “vaults” and must now leave the shelter to explore the post-atomic world outside — which for mainly comedic reasons is always a combination of post-apocalyptic scavenger societies and 1950s retrofuturism.

Assuming the show follows the conventions of the games, our guess is that image is from early in the show, inside one of the vaults. 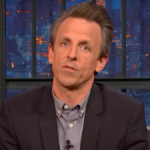 The plot is still very much under wraps, but what is known is that Purnell stars alongside Walton Goggins, Kyle MacLachlan, Xelia Mendes-Jones and Aaron Moten. “Captain Marvel” co-screenwriter Geneva Robertson-Dworet and Graham Wagner of “Portlandia” serve a sco-showrunners, while “Westworld” co-creators Jonathan Nolan and Lisa Joy are the head writers.

Nolan will also direct the first episode, and speaking of Nolan, Purnell’s post also included a short, amusing clip in which he pretends not to know what “Fallout” even is. You can see that in the embedded Instagram post above.