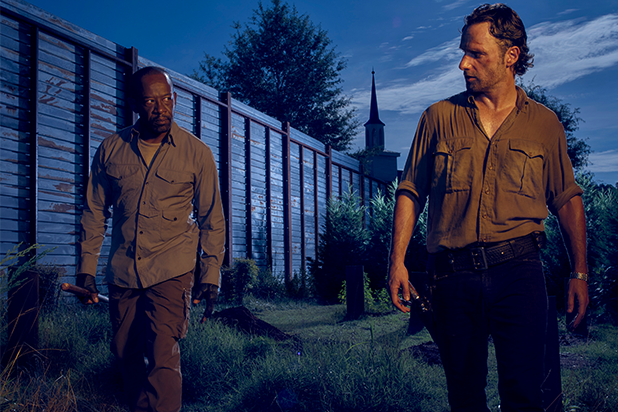 Warning: Spoilers ahead for “Fear the Walking Dead” Season 4, Episode 9

In the midseason premiere of “Fear the Walking Dead” on Sunday, Morgan (Lennie James) shared with the rest of the survivors that he’s planning to return to Alexandria — and back to Rick Grimes (Andrew Lincoln) and company.

A happy reunion between Morgan and Rick doesn’t seem likely, however, since Lincoln is leaving “The Walking Dead” after Season 9 (although Season 9 of the zombie drama sees a time jump forward, presumably leaving “Fear” a little behind in the overarching timeline). But if Morgan does return to Alexandria to find Rick gone, James said it would be “devastating” for the character, especially after all that he and the small town sheriff have gone through together.

“I think it would be devastating, as it would be for a number of other characters,” James told Comicbook.com in a recent interview. He added that Rick, who he saved way back in the pilot of the “Walking Dead,” has been his character’s lifeline through it all.

“For a long time now, since the loss of his wife and his son, Morgan, until he made the acquaintance of Carol and Ezekiel and some of the others, until then, Morgan’s only proof that he’s in the world has been Rick,” the actor continued. “The only person who knows Morgan that’s left … Eastman’s gone, Jenny’s gone, Duane’s gone. The only proof Morgan has that he is alive and in this world has been Rick. The only person who knows him is Rick, and so, in a weird way, wherever Rick is, is home. And if he heads back there and Rick isn’t there, then I think that very much rocks the foundations of who he is now in this world.”

But with the brewing storm in “Fear,” it’s looking like Morgan has plenty of other world-rocking to worry about before a long journey home.