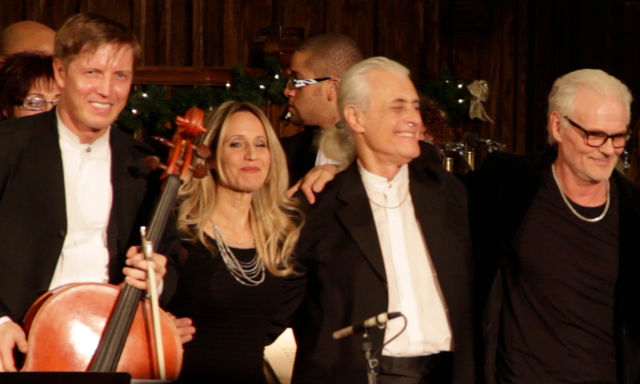 It’s a Thursday night in Glendale, Calif., a scant three days before the world premiere of a concerto celebrating the heroics of a Holocaust survivor and hero, written by an ascending star in the world of film scoring and concert music. The Glendale Philharmonic Orchestra has assembled in a truncated version of 16 musicians, led by famed Maestro Frank Fetta and master cellist Ruslan Biryukov — who looks down impatiently from the stage at the composer while she feverishly reviews her score before addressing the orchestra.

Sharon (pronounced Sha-rone) Farber is an Israeli-born musical prodigy who defies atypical profiling and physicality in the classic sense. Looking as if she would be more comfortable in front of the camera than behind it, Farber is a winner of the 2013 Society of Composers and Lyricists Award in Recognition of Outstanding Work in the Art of Music for Film.

Farber has been maneuvering a successful and much celebrated path in a male dominated industry. Like a flower in a field of concrete, Farber is a standout. And now she faces the testosterone-laden cellist as they are about to rehearse for the first time with an orchestra, her ode to the Holocaust hero Curt Lowens. Biryukov’s eyes are like lasers as he directs his focus from Maestro Fetta, to the front row pew where Farber sits.

Farber shifts her attention from the score to the orchestra, and then hoists herself up to stand on the pew to address the musicians, balancing her 95 lb. body on high-heeled boots.

“I want to thank you for being here” she says determinably, the musicians stopping their tuning in order to hear her. “This concerto was inspired by a man who escaped Nazi persecution and fled with his family to Holland. His name is Curt Lowens and he will be here when we perform. He has saved countless lives and … .”

Biryukov taps the bow of his cello frantically on the stage to get Farber’s attention. “Sharon, please – we are here to practice, can we begin our rehearsal please … .”

Farber does not miss a beat, and like a tractor that chooses to drive over an obstacle rather than divert around it, she continues, ignoring the cello master’s remonstrations.

“The man who we are celebrating with this concerto was a hero of the Dutch Resistance who saved American Pilots and reunited Jewish children. This is a dramatic and emotional piece that requires passion in order to convey the story … .”

She nods, her message conveyed, and takes her seat again in front of the orchestra. Narrator Michael Des Barres, watches over the interplay between composer and the man who is known as ‘the Jimi Hendrix of the cello’. Biryukov nods and finally smiles, his attention returning to the score that depicts his role in what looks like an abstract collage of notes that would cause a meltdown in lesser cellists. However complicated the score appears, the result is a contemporary and communicative concerto that will find a place amongst the great works of our time.

To Des Barres, this is very much like rock and roll. “Working with any group of musicians, whatever the genre is the same: a tribe of emotionality that clashes like cymbals at the climax of a crescendo. I’ve been in a number of bands with world class egos, wild tempers, three-chord entitlement and ‘insecurity’ tattooed on their foreheads.”

Farber composed Bestemming: Cello Concerto No. 1, with the other-worldly talents of Biryukov and Des Barres in mind. Very few cellists are equipped to handle the intricacies, and even fewer have the balls to interpret the desperation and fervor of this concerto. Des Barre’s colorful background as writer of the world hit ‘Obsession’ and lead singer in bands such as Power Station, Detective and Silverhead has uniquely prepared him in dealing with the challenges of performing the unusual role of narrator in a concerto.

Cut to the night of the performance. Unexpectedly the church fills to the rafters as friends and families of musicians mixed with entertainment executives and aficionados of classical music.

Once again, Sharon Farber stands. This time not to address the musicians, but the audience. She introduces the 89-year-old Curt Lowens, and he is received with enthusiastic applause. She takes the same seat in the pew and looks up at Des Barres. Her role tonight is to conduct the narrator much like Maestro Fetta conducts the orchestra.

Des Barres’ powerful narration cuts immediately to the core of everyone’s emotions. A man seated in front of me is bent over, sobbing as he holds each of his twin boys tightly to him. The cello passages at the deft hands of Biryukov are both fluid and percussive. His sweat drips onto the frayed edges of his bow as it moves furiously back and forth along the strings of his cello. The cello weeps, screams, and then takes on the guise of military planes – swooping and dive bombing as a counterpoint to Des Barres’ powerful narration. Still the man in front of me sobs. I clutch the shoulder of an old friend who sits in front of me. I look around, others have been caught up in the emotion that the trio of Farber, Biryukov and Des Barres conjures up in time to Fetta’s frantic conducting.

The music stops, and there is silence.

Then it begins. Applause that begins deep in one’s core, and gets louder. People are standing now. Shouts of “Bravo!” punctuate the explosive clapping, while the petite composer acknowledges the crowd. I look again at that man with the twins. He is also standing, each young boy on either side of him clutching their father. I’m sure he was reminded that there was a time when those two children could have been torn from his embrace, and then it dawns on me – this is what Farber’s concerto is all about.

Des Barres’ interpretation in a Facebook meme that grew viral acknowledged the “oppression of the holocaust and the parallel acts of oppression today.”

Farber probably best summed up the true meaning of Bestemming.

“Holocaust survivors are dying, and as an artist, I feel that I have an obligation to remember and carry on their stories, so that we Never Forget. This concerto has a universal voice that I hope raises the consciousness of those who experience it. Maybe they will take a stand against human crimes. There are many Curt Lowens’ in the world. Each has a unique story. Curt’s story and this concerto relates to every human being.”