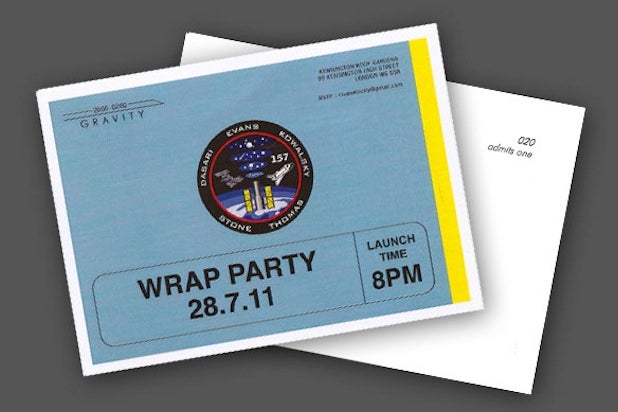 With more Hollywood producers, directors and actors flying to the Far East for co-productions in China and Taiwan, a particular Chinese-language term, “sa ching,” might be useful for folks to know.

Of course, to us in the west, a “wrap” signals the end of filming — a phrase used as far back as the 1920s. And a ”wrap party” is the dispensing of a nice spread and good things to drink after principal photography for a film or TV pilot or series has been concluded — well, not counting emergency reshoots, pickups or dubbings.

(I’m not sure what wrap parties are called overseas in France or Germany or Italy, but I am sure some alert readers here will tell me in internet time in the comments section as soon as this post goes live.)

As for where the term “wrap” came from, I’ve heard that it’s an acronym for “Wind, Reel and Print” — but that sounds like something someone concocted after a drunken wrap party in the ’30s.

Before he departed this plane of existence, New York Times language maven William Safire wrote a piece titled “It’s a Wrap” that was published in his regular Sunday “On Language” column in late February 2005. According to Safire, “The switch from [the earlier movie phrase] ‘wrap it up’ to ‘that’s a wrap’ took place in the ’50s.”

As for “sa ching” in the Chinese language, it gets complicated.

“Sa” means ”to end or complete something,” and ”ching” means “green.” But it goes deeper than that. A Taiwanese film director who lived in Manhattan for 10 years in the 1980s and has attended his share of “sa ching” parties in Taiwan over the years, told me that according to his Mandarin dictionary, “sa ching” comes from an ancient production technique for either making green tea (and thus the “ching” word for “green) or from slowly warming green bamboo in order to turn it into material suitable for a book.

Then there is a Taiwanese film critic in Taipei who told me that while “sa ching” does mean a wrap party, its original meaning has something to do with the final process in tea making. Over the course of time, from ancient to modern days, people in Taiwan and China adopted the term to mean that a “work” is finished, and the term caught on mostly in the TV and movie business in both countries.

A third person told me that, in his opinion, since film stock — celluloid — is sort of greenish in color, “sa ching” was a term adopted by the movie people in Taiwan to mean that the principal shooting was over and only post-production and possible dubbing remained.

More confusion? In some parts of Asia, a wrap party is called a “sa ching” — but it is often also called a “sa ching jyo” with the “jyo” standing for “liquor” — and thus you can get the picture of a lot of toasts with champagne and other things flowing.