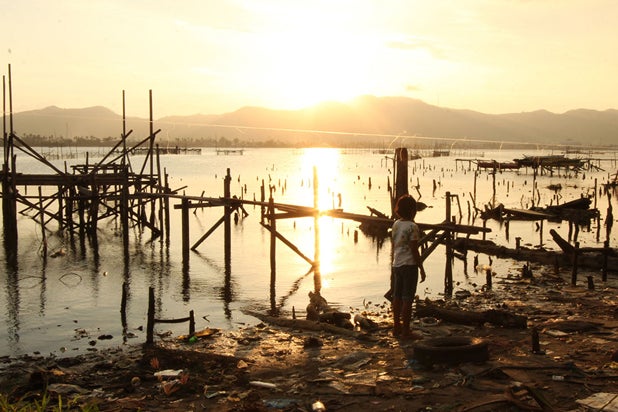 Filipino director Brillante Mendoza has made a feature movie that tells the story of ​a group of ​
survivors of Typhoon Haiyan in 2013 that recently screened in Cannes. The film, titled “Taklub,” might even be up for an Oscar early next year in the best foreign film category — it’s that good.​

Asked by several government agencies to make an “advocacy film” in a feature film format, Mendoza ​hired veteran actress Nora Aunor to anchor the film and ​put a savvy crew together on a shoestring budget.

The result is the most important climate-themed movie of 2015, and it comes at an opportune time as the annual United Nations climate meeting in Paris is set for a December showdown with negotiators and diplomats from poor countries and rich countries.
​
“Taklub,” a Tagolog word which ​stands for ​a handmade basket for trapping fish and gave Tacloban ​City its name, ​is a slow-moving yet gripping 90-minute ​lesson in survival and resilience.​
​
Mendoza used a quote from the ​Bible​ ​to bookend the ​film, which is not a documentary, but a feature film shot with a handheld camera to give it a gritty, real-life feel.

Citing the Book of Ecclesiastes, a title card at the end of the movie reads: “A time to mourn​, and a time to mend.”​

Alfredo Li, chief executive ​branch officer of ​the ​Tzu Chi Buddhist Foundation in the Philippines​, served as a kind of ​assistant producer on the ground during an important location ​shoot for the Mendoza production, and he told me an interesting story about his work. The Tzu Chi religious group is headquartered in Taiwan and led by a 78-year old nun named Master Cheng. ​

​”The movie was an independent film with a limited budget​,​” Li said in a recent email.
​
​”​Mr Mendoza called me one day asking for some ​logistics support, saying ​he needed ​about ​
1,500 people to shoot a particular scene ​in the script ​which would depict the fear that local citizens of Tacloban felt about another storm surge coming in just after the main storm hit the area.”​

​
​”He told me candidly and frankly that his budget for the movie could not afford paying so many extras a daily rate for that scene, so I said to him that the Tzu Chi Foundation in Tacloban could mobilize our Filipino volunteers to do the scene​, without pay.”​

​Not only was this gesture a Godsend for the ​film’s ​shoestring budget​, but​ on the day of the
​scheduled ​location shoot, 3,000 ​Filipino Buddhist volunteers showed up and Mendoza was able to get the shots he needed​​.

​I felt that “Taklub” was such an important cli-fi movie for the world to know about prior to the start of the U.N. climate talks in Paris in December, that as the founder and curator of the annual Cli Fi Movie Awards, I decided to ​hand out top gongs to the Mendoza-helmed movie for best picture, best actress, best cinematography, best screenplay and best child actor categories for the 2015 awards.

We usually hand out the Cliffies, as the awards have been dubbed at the end of the year, but “Taklub” is such a vital movie as the COP21 climate confab gears up this summer and fall, I felt that there was not time to waste by waiting to announce the best cli-fi movie of 2015.

It’s “Taklub” hands down. Other climate-themed films have been nominated, among them ”Chloe and Theo” and “Mad Max: Fury Road” and “Kingsman,” and they are all good cli-fi movies, too. But Filipino director Mendoza has bested them all this for this year’s awards. He deserves the best director gong, too.

​Time is of the essence. Many climate ​activists and scientists tell us that time is running out. If we are to really fight global warming and climate change ​before it is too late, this year COP21 meeting in Paris might be ​our last chance. The Cliffies are not about glamour or glitz, and they exist ​mainly ​to sound the alarm, as a wake up call, before it ​is ​too late, about climate change and global warming.

We gave the Best Child Actor Award to a young Filipina girl named Sierra Perez, a non-professional actor, because we wanted to send a message to her and other children around the world that they matter too, and that even we adults discuss climate issues, the future of the world’s children is also important, so we wanted to include the Best Child Actress gong this year. It’s important.

“Taklub”was funded and sponsored by the Philippines Government’s Department of Environment and Natural Resources in cooperation with the Presidential Communications Operation Office-Philippines Information Office. But it’s not a government propaganda film or a public service announcement on celluloid. It’s a real movie that deserves a global audience.

From Samuel L. Jackson as a U.S. President stranded in a Finnish forest in ”Big Game“ to the hell-bent transsexual prostitutes of ”Tangerine,“ larger-than-life characters abound