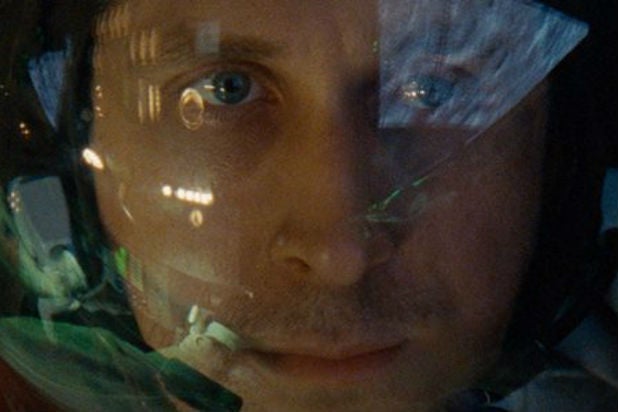 It’s one small step for Ryan Gosling, one giant leap for the 2018 awards season with Damien Chazelle’s “First Man.” The film opened the Venice Film Festival, and most critics say the film reaches for the stars and succeeds.

Early reviews call the portrayal of Neil Armstrong’s career an intimate, suspenseful drama complete with stunning technical achievements and a powerful, stoic, reserved, yet heroic performance from Ryan Gosling as Armstrong. But while critics have noted the comparisons to other space epics like “The Right Stuff” and “Apollo 13,” many of the initial 11 reviews rounded up on Rotten Tomatoes thus far have said “First Man” goes above and beyond.

“‘First Man’ reminds us,” writes TheWrap’s Alonso Duralde, “that there was a time not all that long ago in which we (the taxpaying public, not just some bored billionaire) were capable of sending people into space and to the moon and back again.”

“‘First Man’ bears the same relation to the space dramas that have come before it that ‘Saving Private Ryan did to previous war films,” Owen Gleiberman writes in Variety. “The movie redefines what space travel is — the way it lives inside our imaginations — by capturing, for the first time, what the stakes really were.”

“Nobody has taken us to space this way before,” Leonardo Goi of The Film Stage added.

The most positive reviews noted how Chazelle and screenwriter Josh Singer (“Spotlight”) scales back the overtly jingoistic values of many space dramas and instead plays up the violent, turbulent imagery of space travel. Further, while “First Man” is a period piece, it speaks to the cultural and political conversations of the day, intercutting scenes that weigh the pursuit of space travel against solving issues of poverty and the racial divide.

Among the mixed views on the film however were Stephanie Zacharek of Time. She said that Chazelle’s aggressive, stylized filmmaking clashes with Armstrong’s reserved personality, though she did praise Gosling’s performance.

“This is a respectful movie, even a genuflecting one; there’s never a moment when Chazelle fails to let you know he’s doing important, valuable work,” Zacharek writes. “But that’s the problem: The movie feels too fussed-over for such a low-key hero. Its star, Ryan Gosling, turns in a discreet, sensitive performance, almost too sensitive for the movie around it.”

See some of the other early reactions to the film below. “First Man” opens in theaters October 12.

“Space nerds will swoon for the vintage tech, and for the re-creation of historic moments both large and small. And in the grander sense, “First Man” reminds us — in an era of “truth isn’t truth,” “alternative facts,” and established science being treated like an opinion — that there was a time not all that long ago in which we (the taxpaying public, not just some bored billionaire) were capable of sending people into space and to the moon and back again. And we did it, to quote JFK, “not because it was easy, but because it was hard.” In an era of widespread hopelessness, it’s a lesson worth remembering.”

“First Man,” which is Chazelle’s first feature since “La La Land,” is a docudrama in the most authentic and exciting sense of the word. Chazelle knows that the story of the NASA space program has been told before (quite memorably, in its way, in “The Right Stuff”). So his audacious strategy is to make a movie so revelatory in its realism, so gritty in its physicality, that it becomes a drama of thrillingly hellbent danger and obsession.

Chazelle is so successful at putting you inside the cold, claustrophobic spacecraft that Neil never truly leaves — we’re often just inches away from his face, whether behind a visor or not — that we’re sometimes at sea when it comes to understanding what exactly these men and why it’s so important. If you’d like to know the exact purpose of the Gemini 8 mission, look it up beforehand — “First Man” won’t tell you. It’s a kind of first-person procedural, less concerned with the nuts and bolts of these undertakings than one man’s experience of them.

The film’s tension comes from the awareness, every step of the way, that the setbacks and failures are what count for the American press and public, with the majority seeing only the cost in lives and multibillion-dollar funding. Opposition is voiced to powerful effect in a sharp sequence cut to Gil Scott-Heron reciting his poem Whitey on the Moon, which weighs the space program against poverty and racial inequality in bitingly corrosive terms.

At once cosmic and domestic, the director’s La La Land follow-up zeroes in on a man struggling for success with an unshakable, otherworldly willpower. In that, First Man is unmistakably Chazelle: Gosling’s Neil Armstrong fits nicely in the universe of career-driven, uber-determined workaholics the 33-year-old director has been following since Whiplash. But in its tragic undertones, complex psychological edifice, and claustrophobic visuals, First Man stands out, in both content and form, as a remarkable, jaw-dropping departure from anything Chazelle has previously made.

Minute after minute, Chazelle and cinematographer Linus Sandgren are right there with the (often) handheld camera, coming in tight for allegedly meaningful closeups or jiggling hard to connote, say, the brain-rattling feeling of being an astronaut leaving the Earth’s atmosphere in a space capsule. The wriggly camera work doesn’t make the jostling more dramatic. If anything, it makes the proceedings seem inconsequential, no-biggie events that need to be jazzed up visually with excess technique.

The absolute knockout performance, in fact, comes from DP Linus Sandgren, shooting in deliciously grainy 16mm and 35mm and, when we finally get to the moon, cracking open the widescreen glory of 70mm IMAX. Here the texture of film adds yet another level of antiqued authenticity to the fanatically detailed, fetishizably period-accurate production design, in which Sandgren, also an Oscar-winner for “La La Land,” seems to delight.

Gosling gives a performance of muscular intelligence and decency as Armstrong, a man of calm and restraint, lacking what no one in the 1960s called emotional intelligence. The film suggests that this absence of a normal human boiling point is vital to his success: he stays cool and focused in the spacecraft under conditions that would reduce most people to a blinding panic.