Here’s one lesson to take from the Governors Awards, which took place Saturday night in the Grand Ballroom of the Hollywood & Highland center:

Even when they’ve only got four awards and the show isn’t being televised, it still takes the Academy of Motion Picture Arts and Sciences three and a half hours to hand out Oscars.

But time wasn’t a pressing issue at the inaugural Governors Awards, which moved the presentation of honorary Oscars out of the Academy Awards telecast and onto a special night devoted solely to actress Lauren Bacall, producer Roger Corman, cinematographer Gordon Willis and producer John Calley.

“It’s so much better that nobody’s worrying if 35.5 million people are watching us, or only 29.2 million,” said Warren Beatty as he took part in the presentation to Calley in front of a room of 550 Academy governors, members and guests accustomed to fretting about matters like ratings and running time. 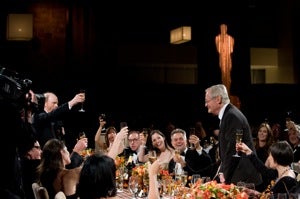 Some Oscar watchers have certainly complained about denying the honorees their proper moment in the spotlight – but with the time constraints of the main Oscar show, the only way to give more than one or two honorary Oscars each year is to do them in a separate event.

Hence the Governors Awards, a collegial, informal evening consciously patterned after early, pre-television Oscar shows, when the event took place over dinner and the onstage speeches were punctuated with toasts and table-hopping.

Certainly, it was a different kind of night for the Academy. There were no roadblocks on Hollywood Boulevard in front of Hollywood & Highland, no metal detectors or ID checks on the way to the ballroom, no bleachers of screaming fans and only one small bank of cameramen and reporters.

Inside the ballroom, which was reconfigured into a reception area and a larger dining room draped with red and gold curtains and sporting a single giant Oscar statue, there were no TelePrompTers, no commercial breaks – and, as guests gathered after the pre-show reception started at 6:30, the expectation of a lighter, breezier evening.

“Are there really only four awards tonight?” asked Julian Fellowes, an Oscar winner for writing “Gosford Park,” who was in town for the opening of his stage version of “Mary Poppins.”

Told that the event was indeed devoted to just four awards – honorary Oscars to Bacall, Corman and Willis, and an Irving G. Thalberg Memorial Award to John Calley – Fellowes grinned.

“Oh, heaven,” he said. “Usually you grow old at these events, waiting for them to give out all the awards.”

In front of a crowd that included Jack Nicholson, Tom Hanks, Jeff Bridges, Alec Baldwin, Abbie Cornish, Vera Farmiga, Marisa Tomei, Dana Delany, Warren Beatty and Annette Bening, Academy president Tom Sherak kicked off the evening by standing at his table and raising a toast – a move that confused some people, who naturally looked to the two onstage podiums but couldn’t see Sherak, who was hidden from some by guests at adjacent tables who were still taking their seats.

The move (and some of the confusion) was repeated half an hour later, after dinner had been served, when Ron Howard rose and toasted Roger Corman with some rambling, engaging anecdotes about getting his start as a director in Corman’s low-budget film factory.

Detailing one particularly rough stretch on his first movie, when he was expected to somehow make 47 extras look like a grandstand full of people, he said Corman’s advice to him was simple: Find a way to make it work, “and if you continue to do a good job on this film, I can promise you this: You’ll never have to work for me again.”

Film clips followed (no doubt the first time the likes of “Attack of the Crab Monsters” and “The Wasp Women” were seen on an Oscar-related show), and then a typically energetic and entertaining rant from Quentin Tarantino, who lauded the films that, he said, “show the sensibility and the f—ing coolness of this man.”

Next up was director Jonathan Demme, who bemoaned having to follow the messy, exuberant and entertaining Tarantino. Demme didn’t do himself many favors by reading a more staid speech off notecards, but he introduced Corman to a standing ovation and gave the producer his honorary Oscar.

“Needless to say, I’m delighted to accept this Oscar,” said Corman, who went on to praise cinema as “the only truly modern art form,” and salute independent filmmakers in particular: “I say to you, keep gambling, keep taking chances.” 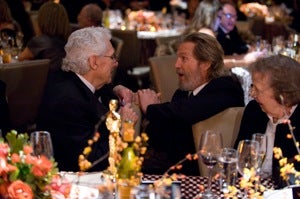 If the initial Governors Award presentation was a bit unwieldy – with three speakers, several different sets of film clips and no clear sense of where it was going – the award to Gordon Willis was cleaner and more streamlined.

Cinematographer and Academy governor Caleb Deschanel made the toast at Willis’ table, joking about the legendary cameraman’s outspoken distaste for Hollywood and the Academy’s inexplicable failure to nominate him for such landmarks as “The Godfather” and “Manhattan.”

“Tonight we make right a long-running wrong,” Deschanel said, introducing a remarkable montage (put together by Jon Bloom) of clips from Willis’ films. Jeff Bridges then came to the podium for a few quick remarks and an introduction: “Ladies and gentlemen, the godfather of cinematography, Gordon Willis.”

Willis took the stage to his third standing ovation (there’d be another later), and delivered some gracious remarks and a brief benediction: “All of you do your best, take care of your kids.”

During an ensuing half-hour break for dessert, Alec Baldwin made a quick exit. (Nicholson had already done so, leaving after the Corman presentation.)

Meanwhile, the show’s writer, David Wild, made some script adjustments: Aware that the audience didn’t know what to expect and could be confused by the combination of toasts from the audience and speeches from the stage, he added intros to clarify the role of each participant. 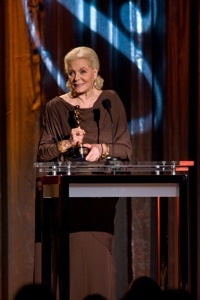 The first of his changes came immediately when the break ended, when the show’s announcer said, “Ladies and gentlemen, to propose a toast to Lauren Bacall, please welcome Annette Bening.”

Bening made her toast and then introduced Kirk Douglas – who, perhaps curiously, got the first standing ovation of the segment when he took the stage to sing Bacall’s praises. (The other honorees had been rewarded with standing ovations when they were toasted.)

Douglas spoke of unsuccessfully trying to seduce Bacall, then introduced a lengthier package of clips; afterwards, Anjelica Huston teared up as she presented the honorary Oscar to Bacall, who finally got her standing ovation and then quickly charmed the crowd with some mildly bawdy humor.

“Heaven, I can’t believe it,” she said, inspecting the Oscar statue. “A man at last.”

She paid tribute to Bogart, Gregory Peck, John Huston and other co-stars and directors, and then said she was also grateful “for the fact that I’m still alive.” A pause, and a wicked gleam. “Some of you are surprised, aren’t you? Nevertheless, I’m here to stay, and you’d better get used to the idea.” 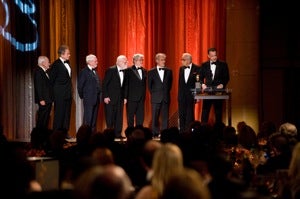 Beatty rambled for a while, Hanks saluted Thalberg, Spielberg accepted the award on Calley’s behalf, and then Bacall, Willis and Corman returned to the stage for a final bow.

Afterwards, the winners posed for photos, 35 Academy governors gathered for their own shot, AMPAS executives and the show’s producers pronounced themselves delighted, and the first Governors Awards slowly broke up.

Around 11 p.m. – four and a half hours after the reception had begun, and three and a half after Sherak kicked off the awards ceremony with his initial toast – Tom Hanks looked around the darkening room, and frowned.

“How does one get out of here?” he asked. “Just stumble along?”