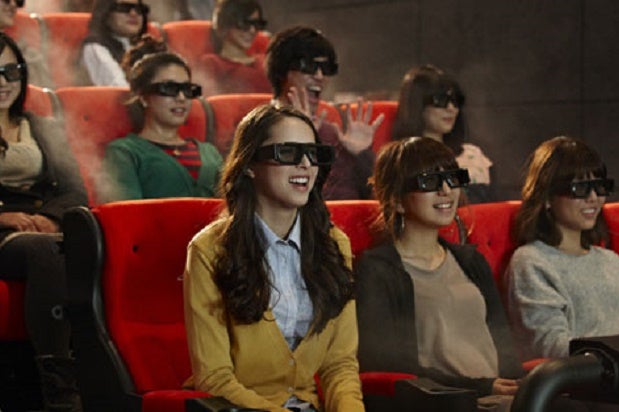 The first 4D theater in the United States opens on Thursday, with a late-night showing of “Transformers: The Age of Extinction.”

The company hopes the immersive experience — which via sensor-equipped motion seats adds effects like motion, bubbles, fog, lightning and scents to the visual and audio presentation — will become the next wave in moviegoing. And what better place to roll out than the heart of the movie industry?

“Los Angeles was the natural choice for the first U.S. location to carry 4DX,” said Byung Hwan Choi, chief executive of CJ 4DPlex. “With AEG, owner and host of the world’s most exciting entertainment venues as our strategic partner, we are very much looking forward to welcoming our audiences to a moviegoing experience never before seen in the U.S.”

Tickets to the 4D showing will cost between $24 and $27. Tonight’s 10:30 shows are sold out, but it will be interesting to see how large an appetite for getting shaken, stirred and jostled during a movie audiences will have.

While nothing this advanced has been widely offered before, there have been numerous “enhanced” theater experiences to come down the pike. In the 1950s, to compete with the exploding popularity of TV, Hollywood rolled out CinemaScope, with its wider screens, and even Smell-o-Vision. “Motion seats,” which offer a similar but more limited experience, can be found around the country and appeal mainly to the young set.

Whether American audiences will spark to 4D in significant numbers remains to be seen, but the format has found a degree of success abroad. The company has launched the format in 109 theaters in 26 foreign countries.

As with 3D, the format will work best with certain types of films — generally speaking, effects-heavy action epics. That caveat will apply as well to 4D, which brings a roller-coaster ride element to the theater experience, likely limiting it to a niche offering for the foreseeable future. But it could, at least in theory, someday become a useful tool in the hands of the right filmmaker, as 3D did for Ang Lee with “Life of Pi” or Alfonso Cuaron on “Gravity.”

One drawback is that it makes it much more difficult to consume popcorn, candy and soda — no small concern, as that’s a major revenue producer for theater owners.