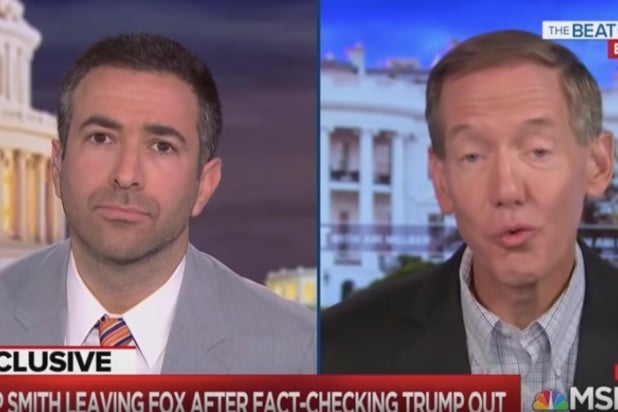 Fox News has gone personal to respond to former reporter Carl Cameron’s criticisms of the network and the loss of longtime reporter and known Trump-critic Shepard Smith.

According to the political news website Mediaite, a Fox News spokesperson issued the following statement to them on Saturday:

“Carl Cameron left the network because he was no longer able to show up to work each day – he has a very short memory for our endless compassion, patience and graciousness in dealing with his multitude of personal struggles.”

The statement comes in response to comments Cameron made in an interview with MSNBC’s Ari Melber Friday about Smith’s sudden and unexpected exit.

“It’s a big loss for Fox News Channel,” Cameron said, “and it says something about the way in which the cable channel has been for years attriting, shrinking the news department and building its right-wing entertainment hosts because that gets ratings and ratings gets revenue and that’s how they make money. It’s a real sad day for people who watch fox news and want accurate information because Shep was somebody who you could reliably count on.”

Cameron also accused the channel of spreading “propaganda,” replacing reporters with “opinion makers,” and using bias in favor of President Trump and his allies.

A representative for Fox News did not immediately respond to TheWrap’s request for comment Sunday, nor did Front Page Live, at which Cameron is chief political correspondent.

“Contemptible. And intentional,” NPR correspondent David Folkenflik said in a tweet in response to one by Hollywood Reporter journalist Jeremy Barr that referenced Fox’s statement about Cameron.

In the MSNBC interview, Melber asked Cameron, who spent 21 years reporting alongside Smith at Fox News, whether he thought Smith’s departure “leaves other people with more power,” and whether his absence will “tilt the network towards being partisan defender of the government, because there’s a difference between doing news, doing some discussion of ideas, opinions and ideology, or being aligned with a government.”

“Right now, I think the news divisions at Fox are just plain shell-shocked, as you saw on the face of Neil Cavuto when he heard it live for the first time,” Cameron answered. “One of the things that’ll be telling in terms of what happens next — that Fox has said it’ll have rotating hosts in the slot that was Shepard’s in the weeks or days ahead. It’ll be interesting to find out whether these are journalists who are telling the truth, or whether these are opinion makers who are essentially coddling the president and his allies.”

Cameron continued, “The reality is that without Shep’s show, Fox News’ 24-hour news wheel is down to really the Bret Baier how, because Chris Wallace is actually on a broadcast channel,” Cameron said.

“Most of the rest is predominantly talk, it’s predominantly supportive of a president who is violating all kinds of American values, laws, rules, precedents, etc. And the American people need to hear that so they can make good judgments. Otherwise, it’s just propaganda, and that’s the stuff of third-world nations, not the one that prides itself as a leader of all nations.”

In another statement to Mediaite, a Fox News spokesperson said, “Tell that to Jennifer Griffin whose report just went viral this week. Or Chris Wallace, Bret Baier, Bill Hemmer, Martha MacCallum or Catherine Herridge who have all done outstanding journalism.”