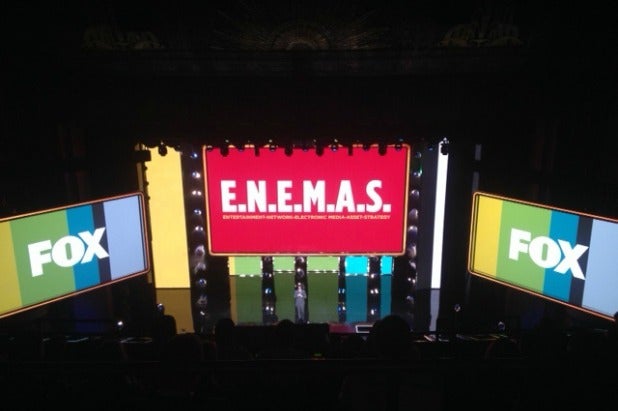 Fox’s emphasis next season is on “eventizing,” entertainment chief Kevin Reilly said at the network’s upfront presentation to advertisers Monday.

The network, in second place in the key 18-49 demographic and fourth in total viewers, is remaking itself after nearly a decade of ratings dominance, which came courtesy of the now-faltering “American Idol.”

“Idol,” like sports shows, benefited from fans who felt they had to watch for fear of missing a big television event. Now Reilly is trying to turn even regular scripted shows into big events.

“We’re eventizing our entertainment slate,” he said in the presentation at the Beacon Theater, adding that the goal is to give viewers an “urgency to view.”

To that end, Fox is offering a one-hour “Simpons” and “Family Guy” crossover, the “Simpsons Guy.” It also plans the “Broadchurch” remake “Gracepoint,” whose stars include Anna Gunn in her first post-“Breaking Bad” role, and “Wayward Pines,” a drama that makes no bones about taking its inspiration from “Twin Peaks.”

Fox is also doing straight-up ratings stunts, one of which is an actual stunt. “Jump of the Century” arrives four decades after Evel Knievel’s failed jump of the Snake River Canyon. Two daredevils will try to do what Knievel couldn’t. “Utopia,” meanwhile, will bring together strangers who will try to build a perfect world from nothing. Would you believe the competitors – included an avid Christian, Muslim and atheist – have different notions of what a Utopia should be?

And Fox is taking a page from NBC’s “The Sound of Music” live performance with “Grease Live.”

Unable to stake out the top spot in the ratings, Fox has found another metric to boast about: It calls itself “America’s next generation network,” and claims the most youthful audience in broadcast television, with a median age of 47.

Fox noted that it was the only network with a median audience in the 18-49 demo.

Andy Samberg, Golden Globe-winning star of “Brooklyn Nine-Nine,” played up Fox’s youthful audience with a joke about the older-skewing CBS, which he said was now the “Colon Broadcasting Network” because of all the colons in its show titles.

That wasn’t his only colon-minded joke. He said Fox was unveiling a new “Entertainment Network Electronic Media Asset Strategy.” He posted its abbreviation on the massive screen behind him.

Samberg noted that his former “Saturday Night Live” colleagues Seth Meyers and Jimmy Fallon had appeared earlier in the day at NBC’s upfront. He joked that he was the third “almost handsome” white guy from “SNL” advertisers were seeing Monday.