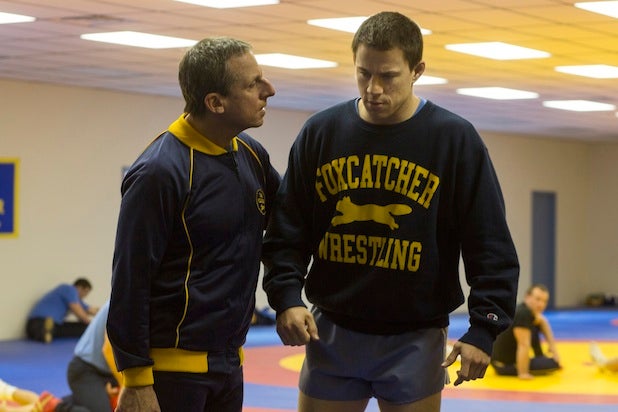 Bennett Miller‘s “Foxcatcher” has now played three film festivals and at the Toronto International Film Festival on Monday night, the reaction was the same as in Cannes and at Telluride: rave reviews, unqualified praise for the actors and big awards buzz.

It started in May in Cannes, where the film premiered. Miller was named best director and Sasha Stone wrote for TheWrap, “Miller seems incapable of making a bad film.” Then it went to Telluride, where TheWrap’s Chris Willman wrote that it left the audience “bowled over.”

In the vast Roy Thomson Hall at TIFF on Monday, “Foxcatcher” played equally well. An intense, nuanced, deliberately paced drama, the film is based on the true story of chemical industrial giant heir John du Pont, whose obsession with Olympic wrestler Mark Schultz resulted in tragedy and violence.

On the surface, the “Foxcatcher” story might seem a little more cinematic than Miller’s last two films, “Capote” (author Truman Capote’s writing of “In Cold Blood”) and “Moneyball” (building a better baseball team through statistics). But Miller is not a filmmaker who goes for melodrama or excess; he prefers the slow burn, the telling details and the gradual payoff, and he delivers those in “Foxcatcher.”

Smart and sharp, the film shares the best qualities of Miller’s other films: great performances. Channing Tatum and Mark Ruffalo are persuasive as Mark Schultz and his brother/coach Dave in roles that required them to have the physiques and moves of real wrestlers. (The work was “painful but rewarding,” Tatum told TheWrap.)

And as John du Pont, Steve Carell is all but unrecognizable, only partly because of a fake nose and teeth. The comedy actor has drained himself of any trace of the Carell that we expect to make us laugh.

It is a transformative, potentially career-changing performance, a big dose of we-didn’t-know-he-had-it-in-him that is likely to impress awards voters the same way it impressed the actor’s wife.

“My wife is my toughest critic,” Carell told TheWrap. “And when she saw the movie she said to me, ‘After a while I forgot that it was you.’ That was the biggest compliment she could have given me.”

Also read: How Steve Carell Created a Character Without Humor in ‘Foxcatcher’

The film itself is not obvious awards bait the way, say, James Marsh’s “The Theory of Everything” is – but neither were “Capote” and “Moneyball,” and both won Best Picture nominations. So it’s safe to say that with three film festivals under its belt, with London and New York fests yet to come, “Foxcatcher” is off to a terrific start – something even a director prone to understatement had to admit.

“I’m feeling very good so far,” Miller told TheWrap at a celebratory after-party on Monday night. “But there’s a long road ahead.”