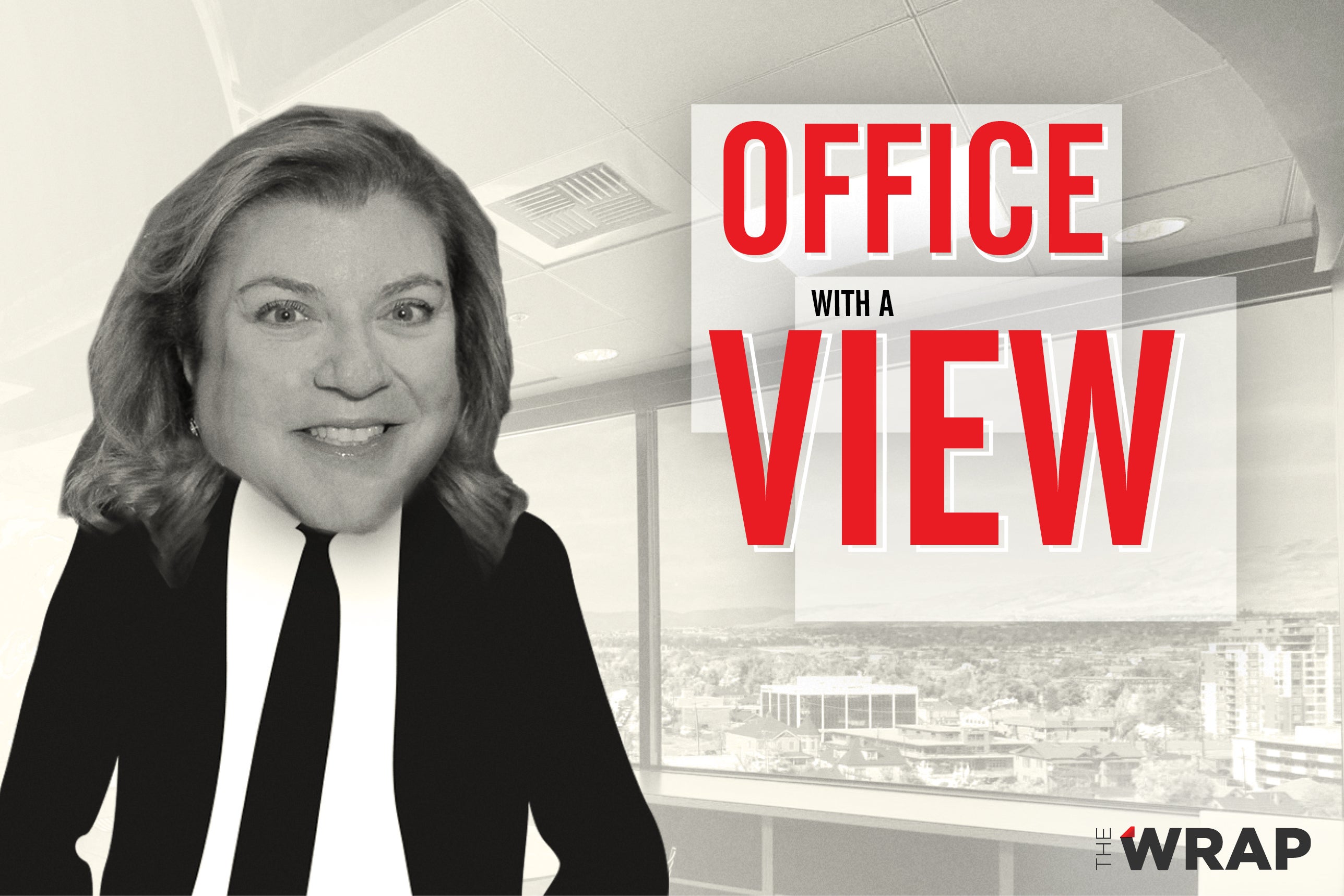 Gail Berman was on the frontlines during Hollywood’s transition to Silicon Valley.

Berman reflected on her transition from traditional entertainment to digital entrepreneur at BermanBraun during what she called a “difficult time” in front of a standing-room only crowd at TheWrap’s 6th annual Power Women breakfast on Oct. 29 at the Montage in Beverly Hills. She was interviewed by Wrap editor in chief Sharon Waxman.

Before joining Paramount, Berman served as president of entertainment for Fox Broadcasting Company from 2000 to 2005 where she helped develop and produce “American Idol,” “24,” “House,” “Arrested Development,” “Bones” and “Family Guy.”

Berman sold her stake in BermanBraun earlier this year to former partner Lloyd Braun and has moved into back into producing television with her newly formed Jackal Group, an independent production entity formed in partnership with Fox Networks Group. The partnership also will provide opportunities in digital and feature films as well as live theatrical entertainment.

Sharon Waxman: You once said, “A lot of people think they know what it means to make that transition but until you actually roll up your sleeves and do it, you don’t really know. It’s a whole other world.” Explain what you meant.
Gail Berman: I’ll take you back to 2007, when Lloyd and I decided to start BermanBraun. I was coming out of two very difficult years at Paramount Pictures. I had gone from being the Queen of May at the Fox Broadcasting Company to a difficult time at Paramount Pictures. It wasn’t an easy transition for me. I’m sure many of you have read about it. It was very unpleasant and a very unsupportive atmosphere. As I knew that tenure was winding (down), Lloyd was also coming out of an equally — I won’t speak for him — but a less-than-great experience at Yahoo. And we’d get together and bemoan our fate.

Also read: Gail Berman on Her Transition From Hollywood to Digital: ‘Going Viral Is Not a Business Plan’ (Video)

Lloyd was experiencing some things at Yahoo that he was explaining to me. ‘You know, you wouldn’t believe it, no one in Silicon Valley understands content.’ We decided together to form this new company just to no longer have the corporate overlords in our lives that were messing with them. So instead of doing what might have been logical at the time, which was sort of going out and partnering with a hedge fund or an investment banking fund, we decided to fund the company ourselves, and go ahead and try to build an entertainment company that was digitally oriented.

And it was very risky in many ways, but it was also kind of refreshing, because even as we toiled in television and some other areas that we were pursuing, that had a lot of restrictions in them. Somebody likes your pilot, somebody doesn’t like your pilot. In this area of our company, we could just do what we wanted to do. We came about it with a very strong principle, which was a principle of entertainment. And that is: quality content and massive distribution. Those are two things that go hand-in-hand with all of the businesses that we currently understand in traditional entertainment.

But for some reason when people are going into digital, they’re like ‘It’s gonna go viral’ or ‘It’s gonna be amazing because I’m gonna get an advertiser.’ And there was a fundamental lack of understanding of: If you’re going to build it you then have to get it out to people. My favorite expression at the time was ‘Going viral is not a business plan.’ It’s not! You get lucky, you go viral.

It was extraordinarily humbling because it was difficult.  It was how are we going to convince portals that our content was better, more interesting, the kind of thing we should partner with even though we were Hollywood-y people, and Hollywood had been up there already (in Silicon Valley) and had done lots of damage already.

Damage in Silicon Valley?
GB: [Hollywood] had come through, swept through, swept out and guess what – they [Silicon Valley] were still standing and Hollywood was still doing its thing. They didn’t necessarily need us. So, we had to make a compelling argument as to why we felt that they did and we had to create a business plan that made sense. We had to build a business from the ground up in a very strategic way.  And it had to be done on a daily basis because there was no one to turn to say, ‘What do you think about this? How did you do that?’

Who taught you the basics of digital?
GB: Lloyd taught me what he had learned at Yahoo. Then the two of us learned together how to do it, what kind of content would work. We started out with a site called Wonderwall. Why did we do that? Because celebrity content works.

There’s weren’t that many places to go at that time
GB: There was AOL, MSN. Maybe a way of looking at YouTube, maybe a way of looking at Facebook even though Facebook was still emerging. MySpace and certainly Google was a thought. We thought about it through the available large players. Most of them said no. That was a problem, that was a little scary. That’s when the hard part started because we built Wonderwall, we had hired an international group of engineers far away. Lloyd and I looked at each other one day and we just weren’t sure about the work they were doing. It just didn’t feel crisp and fabulous the way we wanted this thing to feel.

Lloyd and I decided to do something that is kind of shocking when you hear about it. We decided to build a phantom site with another set of engineers. We paid for it ourselves because we were afraid that this might not be as great as we wanted it to be, and then we would have such egg on our face. So we built a phantom site. And that is what we wound up using, by the way. It was a crazy risk. But it turned out to be the right thing to do.

At what point did it start to get easier?
GB: The wonderful and difficult part of it for me, in so many ways was, forcing myself at that moment in my career to learn something new. I had a skill set in that I knew how to produce, I could make a judgment call about something that seemed very good as opposed to something that did not seem good. But I did not have the skill set for this. I did not have the knowledge of what a product person does, what an engineer does, how that structure works, who talks to who, how we make this better-looking for the audience.

For example, when I would go up north to Seattle they would talk about ‘the user experience.’ And I just kept saying, ‘You know, when my mother used to use that word, it wasn’t a compliment.’  I wanted to refer to them as my audience, as the audience for this particular product. Not as the ‘user,’ because the ‘user’ was never going to engage the way I wanted an audience to engage. So just language differences, just the idea of the word ‘programmer’ or ‘programming.’ When I’m saying that to someone up north, they’re going ‘Programming? That’s an engineering term.’ They don’t hear it as as a content term. So even being able to engage in a functional dialogue was not so easy, and I would get scared about it. I didn’t want to sound stupid, but I was stupid. I mean, I wasn’t a stupid person, but I wasn’t slick with the verbiage and with the way they spoke.

Also read: Disney Interactive President on Life After Shakeup, Staying Ahead: ‘We Need to Change the Tires’

What’s your assessment of how well Hollywood is doing in becoming familiar and understanding this new language and this new way of doing things?
GB: I think that people are moving along. What we chose to do was a unique set of circumstances. It was an incredible experience being able to build our own company. A very northern Californian feeling in terms of building something and being able to value that thing and being able to sell my half to my partner.  It’s not something we as women generally feel comfortable doing.

We’re all learning. I sort of threw myself into something in a particular set of circumstances to get out of something, and it wound up being incredible for me. It’s not the same experience everyone will have. But what I think is amazing is just seeing now how much content is available online, how fast those businesses have grown, the extraordinary difference between how those businesses operate and how traditional Hollywood businesses operate.

Why did you leave BermanBraun? Why start The Jackal Group?
GB: I had an opportunity to leave and I took it. That’s what I’ll share with you on that one. On the new company side, a couple of days after it was announced that I was leaving, I wasn’t really ready to talk about the next phase. I knew I was going to be producing a television show called “Dig” for USA. That kind of helped me get the process of finishing out one thing and starting another thing, because it was the first time since I moved to California in 1991 that I didn’t know what I would be doing next, so that was really a little bit profound and scary.

And that lasted for two days?
GB: It lasted for a couple of days. No, that’s not true. It lasted until I made the decision and accepted this incredible opportunity that Peter Rice was providing me with.

So you’re back to doing traditional television?
GB: A lot of it will be traditional television. It will also be digital. This provides me with the opportunity to do live theater, which takes me back to my earliest roots. It’s also going to have a small film area. I get to do all the things that I love and that I’ve had the good fortune to work in.