We need to talk about Arya.

Sadly, it’s not in praise of Maisie Williams’ continually evolving performance or the subtle themes surrounding concepts of identity that have formed the character’s foundation, but how despite a strong opener, Season 7 has all but obliterated her.

There have been multiple problems with “Game of Thrones” Season 7 — from its insistence that distance is no longer a relevant obstacle to how the march beyond the Wall in the penultimate episode was just the worst plan — but none have stood out as much as the one that involves Arya and her return to Winterfell.

The princess turned stone-cold assassin has gone through some massive changes since her introduction in the pilot, so we knew that her return to her ancestral home and her reunion with her sister Sansa wasn’t going to be smooth. However, watching her drop head first into a script that wants her to do things simply because it wants her to and not because it’s what she should do has been upsetting.

“Game of Thrones” is, above all things, a spectacle and a television event. Beyond the dragons and the zombies and the political intrigue, it’s a set number of weeks every year when a majority of the TV-viewing world gets together to watch, discuss and react to the same thing. Few things can match this caliber, besides some sporting events, so giving millions of people something to tweet about is important. However, in looking to create these moments, which in Season 7 often consisted of fanservice that brought characters together, the showrunners lost basic logic, erasing dozens of hours of backstory and character growth in order to meet a standard, and it doesn’t work.

Luckily, the Stark sisters’ arc had a happy ending. Sansa, after spending years in Littlefinger’s grasp and slowly learning the ways of wit and manipulation, finally got her revenge. The slimy character portrayed by Petyr Baelish has had it coming since long before he betrayed Ned Stark in Season 1, so it was satisfying to watch his throat get slashed by Arya after Sansa calls him out on all his misdeeds. It was extremely satisfying to watch one of the most hated characters remaining get broken down by those who he tried to manipulate.

However, in order to have an epic twist like Baelish’s final scene, there needs to be some sort of build-up. No moment hinted that Sansa, Arya and Bran were working together or plotting to take him out. There wasn’t any shot that showed Sansa questioning what Littlefinger was telling her about Arya. As far as we know, when he told her that Arya was looking to become the Lady of Winterfell, she believed him. But in the next scene, she’s ringing him up on charges of murder and treason. Despite the fact that Bran claims to know everything, at no point does he have a conversation with Arya or Sansa that they’re being played.

Also Read: 'Game of Thrones': Just to Be Clear, Here's How Jon Snow and Daenerys Are Related

There isn’t even anything between the established characters for it to make sense. Before she makes it home, Arya has two subtle but huge character moments: when she runs into her direwolf Nymeria and when she has a meal with the Lannister soldiers. Both are there to throw a knife in her plan to check names off her kill list. Nymeria’s meeting is especially noteworthy as Arya learns that her wolf has found a new family — a pack — which forces Arya to question her lone wolf status. The meeting with the soldiers proves that there is more morally gray areas than she realized. Then she and Sansa have a bonding moment in the crypt below Winterfell where they begin to share their trauma. It’s all leading to an Arya who is still questioning her place in the Stark family, but has learned about the complexities of the world and how it doesn’t fit into her childhood dreams of death. 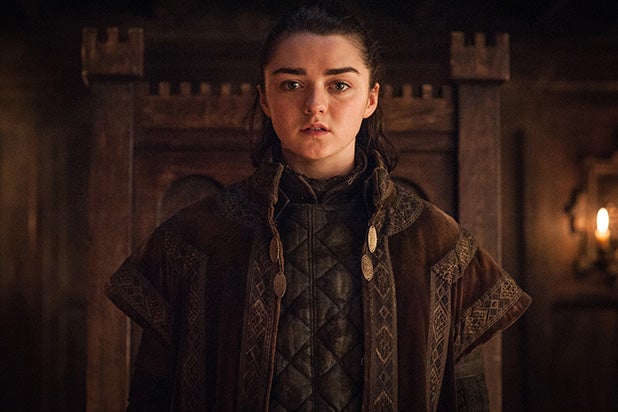 However, Arya does a full reversal in the second half of the season, not only failing to read into Littlefinger’s obvious betrayal but also in failing to understand anything about Sansa, despite how she’s been taught to inhabit people and watch closely. This is also after multiple seasons in Braavos where Arya was forced to choose between being a Stark and being “no-one” — choosing the former. Some critics claimed that the sisters were acting strangely because of being at home for the first time, but that’s a psychological leap pushed onto the show by the audience.

It’s purely a trick. Showrunners D.B. Weiss and David Benioff admitted to it in the behind-the-scenes featurette that aired on HBO following the episode.

“So much of that scene is what happens beforehand and building up the tension between Sansa and Arya in the earlier episodes where you really believe that one will potentially kill the other,” Benioff said. “It’s one of the benefits of working on a show like this, where over the years so many beloved characters have been killed and so many characters make decisions that you wish they hadn’t that you can believe that Sansa might conspire against Arya, or that Arya might decide that Sansa has betrayed the family and deserved to die.”

We can assume what happened. Everything from Arya’s behavior to how Sansa eventually came to understand what Littlefinger had done is all based on assumptions that the audience makes, and only makes in order to understand the scenes. We are forced into these logic puzzles because, after seven seasons, we know a thing or two about the characters and want them to fit into what has been established. In actuality, the writers are dealing with their own logic puzzle, trying to force the characters into situations simply because they care about the shock, not seven seasons worth of storytelling.

It’s not even just Arya. Sansa, who began this season stating that Littlefinger shouldn’t be trusted, still entrusts him with her worries and fears concerning Arya’s behavior. Tyrion, who claimed to know his sister Cersei better than anybody, still gives in and trusts her in their final meeting when she’s proved over and over again that she’s vindictive and scheming. The Hound, driven almost entirely by anger from childhood trauma, goes up to his brother the Mountain and just talks with him before walking away. Even Littlefinger, who has been able to see through every plot and plan for every situation, somehow isn’t able to see how his plan could go awry.

The audience is then left with the spectacle of watching Arya Littlefinger’s throat, or finally seeing what happened when Cersei and Daenerys finally met. These are all moments that fans have been waiting for. But how much can they matter when they are forced upon us and not earned, when characters are written into situations that tread upon all logic?

If the Arya that stands next to her sister in the cold isn’t the Arya we’ve been following for seven seasons, then how can we truly feel how powerful that scene should be?

Don’t worry ”GoT“ fans — we have you covered