(Warning: This post contains spoilers through the fourth episode of “Game of Thrones” Season 8, titled “The Last of the Starks.”)

As the director of three of the six final “Game of Thrones” episodes, David Nutter might know more about what’s going in Westeros than anyone who isn’t named Dan “D.B.” Weiss or David Benioff (the HBO series’ creators).

However, his journey with viewers ended after Sunday’s “The Last of the Starks,” which saw most of our important players — including Daenerys, Jon Snow, Tyrion, Missandei (R.I.P.), Grey Worm, Varys, Arya and The Hound — leave the North following their victory in the Battle of Winterfell to head to King’s Landing. They had many different reasons for their trek down to Cersei and Nutter was instrumental in setting them all up last night.

TheWrap spoke with him Monday about directing not just that episode, but two others in the eighth and final season: The season premiere “Winterfell,” and Episode 802, “A Knight of the Seven Kingdoms.”

See our Q&A with the longtime “GoT” staple — who also directed Season 3’s infamous “Rains of Castamere” a.k.a the Red Wedding episode — below. 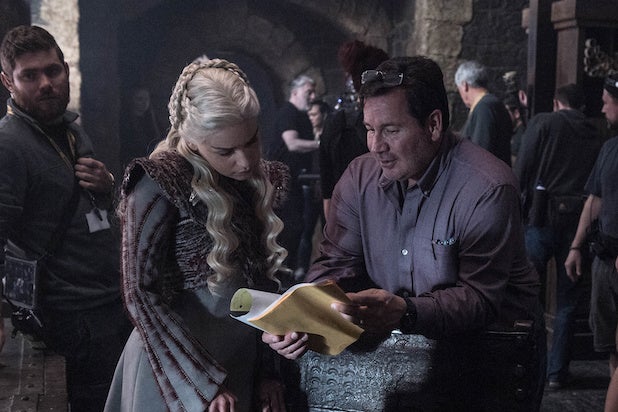 TheWrap: With Brienne and Jaime, can you walk us through how things were set up so nicely for them in “A Knight of the Seven Kingdoms” and then took a very dark turn in “The Last of the Starks”?

David Nutter: Well, I think that once Jaime realizes what Cersei has done after hearing from Sansa and Brienne about the killing of the dragon and so forth, he knows that she’s in deep trouble and that feeling that he was trying to escape, and that responsibility he was trying to escape, and that feeling and care for his sister that he was trying to forget basically came back in like a waterfall. And a tiger can’t change his stripes and he couldn’t let go of that. So I think this really caused him this profound conflict that he needs to basically go to his sister and go back to her as he has many, many times before.

So is Jaime going back to help Cersei or to join the fight against Cersei?

He is on his way to King’s Landing, that’s about all I can say. (laughs)

There is clearly a secret-keeping problem in Winterfell, with Jon Snow’s inability to promise Daenerys that he wouldn’t tell Arya and Sansa he’s Aegon Targaryen. Can you explain how you set this up so Sansa would then tell Tyrion, and it would all spread from there?

Well, it’s not so much that Sansa tells Tyrion, but Sansa is talking to Tyrion and he suspects something in her reaction to that. So I think that comes basically through his reading Sansa’s expression more than anything else.

What about Tyrion and Varys’ very different reactions to Jon’s claim to the Iron Throne, with Tyrion trying to vouch for Danys’ side still and Varys’ wanting to support Jon/Aegon?

I think even in that sequence on the boat, it’s very clear to me that Tyrion’s feelings toward Dany have blinded his ability to be the proper [Queen’s] Hand to Dany that would be more clearheaded, so to speak. I think his feelings for Dany are clouding his opinion of her at this point.

The title of Sunday’s episode, “The Last of the Starks,” coupled with the meeting in the Godswood, gave me the feeling this might be the last time Arya, Sansa, Jon and Bran are all together.

Well I think that it’s called “The Last of the Starks” because people are leaving Winterfell. And you do see the four Starks together, in a scene together. So I think that kind of answers that question. We’ve been through four episodes at Winterfell and we’re on a bit of a journey, and it feels like “The Last of the Starks” really is the four of them together and the best example of them as a family. But I’m not going to bring up anything going forward.

What was it like directing the first two episode of the season — which set up “The Long Night,” directed by Miguel Sapochnik — and then filming the aftermath of the Battle of Winterfell in Episode 804?

Well for me, it was just an important factor that before every sequence, remembering where the characters were: in situations of trepidation and of fear, prior to the attack, or how the characters reacted in their relief and joy that they would survive it. So basically, those were the different things. Before each sequence and shot I would remind myself, remind the actors, remind everyone involved, where they were emotionally at that point and where they were coming from. That was important to delve into each of the moments that I shot and to make it feel honest to the scene that they were in.

One fan-favorite episode of the final season seems to be “A Knight of the Seven Kingdoms,” which had a very different tone than the rest. How did you go about shooting those intimate moments before the big fight?

After being away from the show for two seasons, Seasons 6 and 7, when I read the first episode, I tried to tie myself into that little kid that wanted to be back and then also realizing that, in being away for two years, one thing I noticed with the fanbase being so immense and so intense that, when I came back and would tell the actors, “I want you to remember one thing: the audience just wants to see you breathe.” That was something I wanted the actors to not have: no responsibility to force something, to allow them to do things in the proper emotional setting and way that was comfortable. We did a full rehearsal of every scene prior to shooting, which really had never been done on the show before. And we were rehearsing all three episodes completely, blocking and everything. So once we got on set, they were much more familiar with what was going on and where they were emotionally and knew what was going to happen. So when they shot the scenes, they had a much clearer range and it gave them the freedom to kind of flex all their muscles that I thought were important. And I think the writing Bryan [Cogman] did for [“A Knight of the Seven Kingdoms”] was amazing, and I’m really happy we were able to play that. But I also feel it was the first opportunity in seven years and seven seasons of everyone wanting something, and yet being on the move, that basically you got a chance to watch these characters breathe in some respect, and self reflect, and have interpersonal moments we never would have had in another episode. So I think the audience loved that, and being with the characters they loved so much.

Also Read: 'Game of Thrones' Season 8, Episode 5 Preview: The Final Battle Is About to Begin on Cersei's Turf (Video)

The coffee cup — can you explain what happened there and if you’ve gotten to the bottom of it and if it was a Starbucks coffee cup?

I’m sure HBO will get together and do a response to that very soon. (Note: They did.)

Missandei’s death and her final word, “dracarys,” is that supposed to lead us to believe Missandei gave Daenerys permission to burn down King’s Landing and Dany may have finally reached Mad Queen status because of Missandei’s execution?

I wouldn’t say Missandei is giving Dany permission to burn down King’s Landing. To me, it felt like “dracarys” was more geared toward Cersei personally. So I think that was what that was all about. And also, too, it was a way to let Dany know that she is not going to fall to the fear and allow Cersei to get the best of her in some respect, so that was important there. But I also think for Daenerys, Emilia Clarke, she’s such an amazing actress, her face can morph in how she feels about things, which is quite fantastic how she can react to stuff. I actually saw an expression from her that I’ve never seen before, something where I felt quite fearful of what happens next and what will happen next in the series, that Dany has never been quite this angry. But then prior to that she was so calm, cool and collected in that scene, but also determined that this is what’s going to happen. I felt it made what she’s going to end up doing, of course, this is just pouring gasoline on it.

What are your thoughts on the final-season episode leaks and guarding things more heavily going into the final two?

Well, I don’t know what [HBO does] or how they do it, so that’s kind of out of my purview. But as far as leaks are concerned, I think a lot of fans of the show might hear about leaks but they don’t try to find out what they are, because I think fans of the show don’t want to encounter them. I’ve never come across as a casual internet person a spoiler that I wasn’t trying to look to find. But leaks have grown out of proportion, I think. 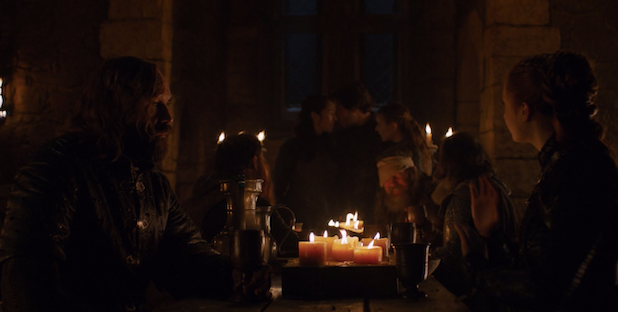 We noticed Podrick in the background in the Great Hall in Winterfell on last night’s episode, flirting with two ladies and then walking off with them (see picture above) — can you tell us anything else you snuck in?

That was a big [showrunner] Dan Weiss thing. He wanted to make sure that was caught — that Podrick moment on screen — and that was something very, very important to him, that you caught that. So good (laughs). Another thing was Dan Weiss wanted a funny bit where Jaime stands up to Tormund and then walks away and then Tyrion pours his wine into Tormund’s ale. Dan Weiss wants there to be a new drink called the “Tormund,” which is gonna be part wine and part ale. Hopefully we can start that trend.