In the special, the comedian takes aim at transgender individuals, HIV and AIDS, gender identity politics, and more, eliciting a swift response from GLAAD.

“We watched the Rickey Gervais ‘comedy’ special on Netflix so you don’t have to,” the organization posted on social media. “It’s full of graphic, dangerous, anti-trans rants masquerading as jokes. He also spouts anti-gay rhetoric & spreads inaccurate information about HIV.” 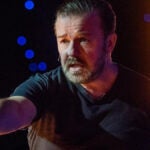 GLAAD continued: “Netflix has a policy that content ‘designed to incite hate or violence’ is not allowed on their platform, but we all know that anti-LGBTQ content does exactly that. While Netflix is home to some groundbreaking LGBTQ shows, it refuses to enforce its own policy in comedy.”

Gervais has long courted controversy with his polarizing brand of humor and “SuperNature” is no different. In addition to issues facing the LGBTQ+ community, Gervais turns his gaze to minorities, Holocaust victims, pedophilia and other topics considered divisive or taboo.

“I talk about AIDS, famine, cancer, the Holocaust, rape, pedophilia, but no, the one thing you mustn’t joke about is identity politics. The one thing you should never joke about is the trans issue. ‘They just wanna be treated equally.’ I agree. That’s why I include them,” Gervais said in his special. 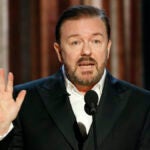 Throughout the set, he makes jokes about the new emphasis placed on proper pronoun usage and the difference between “old-fashioned women” and “the ones with beards and (penises).” Gervais also claims that making jokes about the trans community will result in comedians getting cancelled.

While he ended “SuperNature” by telling the audience that he supports “all human rights” and “trans rights are human rights,” GLAAD spoke out against the precedent being set with negative LGBTQ rhetoric becoming protected under the guise of comedy.

“The LGBTQ community and our allies have made it very clear that so-called comedians who spew hate in place of humor, and the media companies who give them a platform, will be held accountable,” the organization wrote on Twitter. “Meanwhile, there are PLENTY of funny LGBTQ comedians to support.”

Last week, Gervais was a guest on SiriusXM’s Jim Norton & Sam Roberts show, where he admitted that he expects to draw backlash for the show.

“Well, I don’t know what to say really. To me, there’s nothing controversial in that because it’s just jokes,” Gervais said. “I even explain what ‘irony’ is at the beginning of the f*cking show, and everyone there, I don’t know how many people I played to–half a million people–no complaints. They laughed at all the things, right? But everyone’s gonna complain about everything in it. Every single line, someone is going to complain, either because they hate it, they don’t get it, it’s coming after…Here’s the thing about comedy. I can list 20 taboo subjects. Everyone in the world laughs at 19 of them, and hates the one that affects them.”