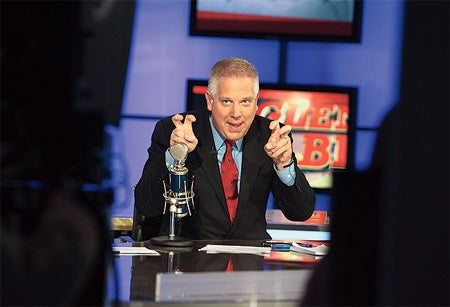 Glenn Beck is having is his Fair and Balanced Fifteen Minutes.

The Fox News host is on the cover of Time magazine, the subject of a lengthy, relatively glowing profile – at least by “liberal media” standards – and has been touting for days his interview with Barack Obama, scheduled to air tonight.

Of course, this would be huge news … if it were true. Beck infamously called Obama a “racist” in July, leading at least a dozen sponsors to pull their advertising from Beck’s show.

“Tune in for Glenn’s one-one-one ‘interview’ with President Obama — it’s the president in his own words.”

Obama is scheduled to appear on the “Late Show with David Letterman” tonight, part of the most recent Obama Press Tour. He hit the Sunday talk show circuit yesterday — armed with some familiar talking points — appearing on ABC, NBC, CBS, CNN and Univision. He did not appear on Fox News.

That didn’t deter Beck from teasing what will essentially be a cut-and-paste bit not unlike Jay Leno’s interview with Obama last week on the debut of his new 10 p.m. show.

Leno, too, teased the interview on whatever NBC is calling “Sunday Night Football” on the eve of his return to the air: “We also have an interview with President Barack Obama, we’re working on that, you might see that tomorrow night.”

It turned out to be nothing but an ill-conceived comedy bit.

Which is what this is.