In this morning’s roundup of movie news ‘n’ notes from around the web, the Cannes lineup is scrutinized and analyzed.

Pundits, reporters and interested parties look at the announcement of the Cannes Film Festival lineup, and weigh in:

The Guardian: “though there aren’t quite as many monster directorial names in this year’s list [as last year’s], it is still a blue-chip lineup with names like Godard, Kiarostami, Allen and Leigh.”
Pamela Grant, indieWIRE: “The list had few surprises, despite the drop in entries, but the roster did not disappoint.”
Sasha Stone, Awards Daily: "The lineup doesn’t appear to be half as interesting as the speculation pieces leading up to it. It never is, though."
Tom O’Neil, Gold Derby: “Cannes film festival competition short on Oscar contenders.”
Guy Lodge, In Contention: “[M]any of the expected names are present and correct, including former Cannes champs Leigh, Kiarostami, Mikhalkov, Tavernier, Weerasethakul and González Iñárritu.”
Anthony Kaufman, indieWIRE: “The problem with Cannes’ auteur-driven programming is that most of the veteran competing directors have made some lame films along with their great films. You kind of have to go with your gut, and hope for the best …. ”
Eric Kohn, Screen Rush: "Put simply, it looks like a Cannes lineup." 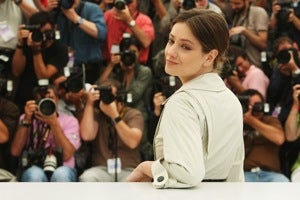 Movieline looks at the fact that not a single Cannes competition entry was directed by a woman, and offers a history lesson: it’s not unusual. Despite anomalies like last year, with its trio of female directors in competition, the festival has been 92 percent male in the last ten years. But they sure love to put actresses on their juries: this year it’s Kate Beckinsale and Giovanna Mezzogiorno (right; photo by Sean Gallup/Getty Images). (Movieline)

The Believer continues its “Creative Accounting” feature by printing the complete line budget of “Breaking Upwards,” the $15,000 film from Daryl Wein and Zoe Lister-Jones recently released by IFC. You need to buy the issue to see the whole thing, but the excerpt is pretty remarkable: the wardrobe budget was $14.99, for instance, because everybody wore their own clothes except for one American Apparel t-shirt that got lost and had to be replaced. But a $1,400 hard drive ate up more than two-thirds of the materials budget, and almost 10 percent of the entire cost of the film. (The Believer)

The tracking for the Chris Rock/Martin Lawrence film “Death at a Funeral” worries John Horn at the Los Angeles Times. Survey data, he says, shows that blacks are far more interested in seeing the movie than whites, “suggesting that while we might have a black president, there remain stark racial splits within popular culture.” With a white director, Neil LaBute, and a story closely adapted from the 2007 British film of the same title, the movie was apparently expected (at least by Screen Gems and Horn) to draw a more diverse audience – though, as he points out, it’ll probably earn as much in its first day in the theaters as the original “Death at a Funeral” did during its entire run. (Los Angeles Times)

But Vadim Rizov thinks Horn’s piece is “odd,” and scolds that the film “does not appear to be bringing out the finest in post-Obama, ‘post-racial’ language.” His main point seems to be that Horn goes overboard trying to point out all the reasons why white audiences should want to see the film, from director Neil LaBute (an unknown to the mainstream audience, who have no idea of his race) to co-stars like James Marsden and Luke Wilson. “’T]he levels of racial fretting must be off the charts if we’re counting on a guy whose highest profile gigs lately have been in AT&T commercial to bring in audiences,” he says of Wilson. (Independent Eye)

Anne Thompson considers the case of Oscar-winning documentarian Alex Gibney, who has no less than three films at the Tribeca Film Festival. (One, “My Trip to Al-Qaeda,” was recently acquired by HBO, the 800-pound gorilla in the doc world; one is a work-in-progress about former New York governor Eliot Spitzer; one is a segment in the anthology film “Freakonomics.”) “Gibney,” she says, “sits comfortably at the top of the documentary food chain.” I think she means the non-celebrity documentary food chain; Gibney is accomplished and respected, but to the public he’s no Michael Moore or Morgan Spurlock. (Thompson on Hollywood)

The Tribeca Film Institute, which is affiliated with the film festival that kicks off next week, announces six films that will “receive financial and creative support” from the TFI’s Sloan Filmmaker Fund, which goes to “narrative film projects that dramatize science and technology themes in film or that portray scientists, engineers, or mathematicians in prominent character roles.” The selection is made by two filmmakers, a Nobel-winning chemist, a professor of physics and an Opthamalogist; this year’s recipients are “The Devil’s Teeth,” “Future Weather,” “Haber,” “Map of the Universe,” “Midnight Sun” and “Obselidia.” (Tribeca Film Institute)