In this morning’s roundup of Oscar news ‘n’ notes from around the web, more awards are bestowed, and an “Avatar” star promises to shake you up and make you cry.

“It will pick you up and shake you like a little rag doll,” says Sigourney Weaver of “Avatar,” in which she stars. Obviously, she means that as a compliment. She also says she was weeping by the end of the film. Again, she means that in a good way. (The Guardian)

The Washington D.C. Area Film Critics Association announces its winners: “Up in the Air” for best picture, Kathryn Bigelow (“The Hurt Locker”) for best director, George Clooney and Carey Mulligan for actor and actress. No real surprises or momentum-shifters. I have to imagine that sooner or later, some of these groups are going to stop giving the best actor award to Clooney … (The Wrap) 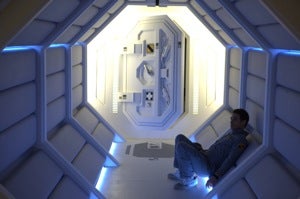 “Moon” director Duncan Jones has launched an Internet campaign to land an Oscar nomination for his leading man, Sam Rockwell, but he didn’t need any online petititions to pick up a couple of big awards for himself and his film at the British Independent Film Awards on Sunday. “Moon,” right, won Best British Independent Film, and Jones took home the prize for Best Debut Director; Oscar winner (for her short, “Wasp”) Andrea Arnold won the Best Director award for “Fish Tank,” which won’t be released stateside until 2010. Carey Mulligan (“An Education”) and Tom Hardy (“Bronson”) won for actress and actor. (BIFA)

In his weekly Oscar assessment (now it’s “15 Weeks to Oscar”), David Poland explains why he doesn’t think “Nine” is very good, and why he still thinks it’ll get a lot of nominations: “We live in an era in which people go to the movies expecting moments … And ‘Nine’ gives you moments.” (Movie City News)

Oscar winners Bruce Springsteen, Robert De Niro and Mel Brooks pick up Kennedy Center Honors. Now two of the key players on the Academy Awards show production team – associate producer Michael Seligman and executive in charge of talent Danette Herman – can come back to L.A. and get to work on the Oscars. (The Wrap)

Kris Tapley spotlights Hans Zimmer’s score to “Sherlock Holmes,” and presents a small taste of what is an insanely varied, occasionally bombastic, relentlessly inventive piece of work that certainly plays a dominant role in the movie. (In Contention)

Jeffrey Anderson looks at all the year’s awards contenders that were “based on a true story”: “Public Enemies,” “The Damned United,” “Julie & Julia,” “Coco Before Chanel,” “Bright Star,” “Invictus,” “The Young Victoria,” “The Informant!” … He could have mentioned “An Education,” “Me and Orson Welles,” and a few others as well. He thinks that part of the fun of “Inglourious Basterds” is that it definitely isn’t based on a true story, enabling Quentin Tarantino to completely disregard what we know really happened in World War II. Fiction, he concludes, “feels so good!” (Cinematical)