The search giant unveiled its latest product on Tuesday – Google Buzz – a broad swipe at creating a social network that the company.

The Gmail application – available to people with Gmail accounts – is supposed to “go beyond status messages,” allowing users to share “updates, photos, videos” and “start conversations about the things you find interesting.”

"Social has been transitioning," Google founder Sergey Brin said at the Buzz launch event on Tuesday. "We’ve had success – this is just the next evolution … Other social things focus on entertainment, I find it useful for productivity."

Google has tried its hand at building a social network before. Orkut, the social network it launched from scratch in 2004, has become popular in Brazil and India but has largely failed to gain any real traction in the U.S.

Through Gmail, Buzz will have a built-in base of more than 150 million users. Facebook, by contrast, has more than 350 million; Twitter has about 18 million.

Moreover, the Mountain View, California-based company is hoping Buzz will help eliminate some of the "noise" that comes from using disparate social networking tools. 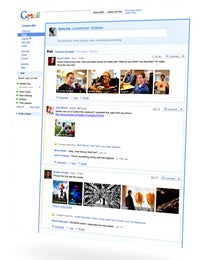 "Several years ago a couple of Yahoos thought they could organize the web," Bradley Horowitz, Google's VP of product management, said Tuesday. "Soon they hired up 10,000 people to organize content. Then come algorithmic search engines. But it was still pretty bad. There was no relevance. It was still really hard to find things."

"We’re seeing the same thing with social sites now," Horowitz continued. "But it’s even (harder) to find value because there is too much noise. When you have 500 or 5,000 friends, it’s very difficult. TMI, oversharing. There are lots of ways to define friends — that’s how you can have 5,000. And this will continue growing, and the problem will get worse and worse."

The interface looks a bit like Facebook’s FriendFeed, which is intentional, as Google has not-so-secretly coveted Facebook’s popularity – and borderline ubiquity – as a social network.

"We try not to pay attention to competitors," Google product manager Todd Jackson said of the comparison to FriendFeed. "Sharing was the next logical step to add to Gmail."

Google is hoping that Gmail users will gravitate to its ease of use – you’ll already “follow” people you e-mail and chat with in Gmail, with messages and updates automatically linked to your Gmail’s inbox.

And here’s something Facebook has yet to develop: “New posts and comments pop in as they happen,” according to Google. “No refresh required.”

Google is also hoping to integrate Buzz with GoogleWave, the ambitious next-generation communication product the company launched last May.

"A lot of this is inspired by Wave," Horowitz said. "We want integration with Wave."