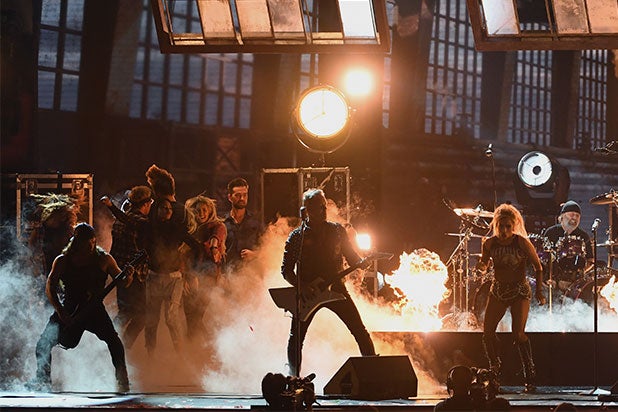 For a show touted as music’s biggest night, the 59th Grammy Awards had some significant sound and performance issues throughout the live show — and people on social media had some strong words for the tech team.

The problems started with the opening number by Adele, the Grammy winner for Song of the Year who struggled through her vocally demanding hit “Hello.” It seemed as though she couldn’t hear herself, and it sounded like the show’s producers played the audio from the auditorium rather than from her microphone.

Later, Katy Perry struggled through her new single “Chained to the Rhythm,” pressing her finger to her ear before she was drowned out by her own backing track. Metallica and Lady Gaga’s performance went off the rails completely, as rocker James Hetfield’s mic didn’t work at all during an awkward and silent first verse.

Also Read: Adele Re-Starts Shaky George Michael Tribute: 'I Can't F-- This Up For Him'

Following the rock debacle, Adele came back to pay tribute to the late George Michael with a version of his song “Fast Love” — a performance she halted and started over again, presumably because she was off key and a few steps behind the orchestra that accompanied her.

Representatives for the Recording Academy did not immediately respond to TheWrap’s request for comment. Fans watching the show at home certainly took notice.

“The Grammy’s sound tech needs to be fired,” wrote Twitter user @manthapie.  Another suggested that the engineer (if there is indeed one lead engineer) should “update his Linkedin immediately,” calling the ceremony “a disaster.”

In reference to a joke made by show host James Corden about the low-quality folding chairs in Los Angeles’ Staples Center, another user tweeted, “the chairs are better than the sound quality.”

See more spirited critiques of sound at the Grammy awards:

Grammy has become the new BET. Lady Gaga 2nd Mic not working, cameraman messing up, Adele starting over, sound going in & out on performers

The Grammy's sound tech needs to be fired.

who the fuck is the sound engineer at the grammy's

The Grammy sound guy better be updating his LinkedIn immediately. This is a disaster.

The chairs are better than the sound quality of the performances #grammy #musicawards?

@alex the sound man for The Grammy's will not return for the 60th Grammy's. Hetfield and Adele will see to that.

Grammy sound tech, what happened to you tonight?