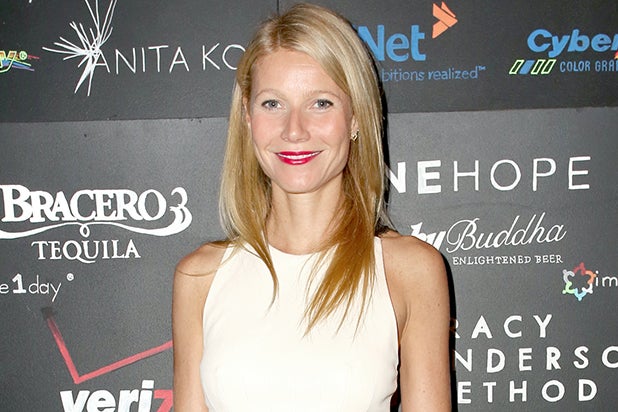 Gwyneth Paltrow appeared on Howard Stern’s radio show Wednesday, where the Oscar winner and lifestyle guru dropped some pretty significant truth bombs about her career, her past loves and her legacy in pop culture.

Promoting the forthcoming comedy “Mortdecai” with Johnny Depp, Paltrow touched on Brad Pitt, Ben Affleck, Robert Downey Jr., now-ex Chris Martin, movies she’s passed on and if that classic Coldplay track is indeed about her. Here are the five biggest revelations from Paltrow and Stern’s chat:

“On ‘Iron Man’ one, there was literally no script,” Paltrow said of Marvel’s flagship film. “We would come in, and we would rehearse, and you get sides, the lines for the scene, and would be like, ‘This is garbage,’ and rip it and throw it away.”
In Downey’s defense, Paltrow said “the writers know, when they work with Robert, it’s part of his process. Even if Robert wrote the scene the night before he’s like, ‘This is shit’ … it’s fun. It’s really fun.”

“I really wanted to do it,” Paltrow said of the Paul Thomas Anderson classic, revealing she was up for the part of Roller Girl that eventually went to Heather Graham.

“My grandfather — I was very, very close to him and he was pretty conservative. And I just thought, I can’t be totally naked and giving a BJ on screen. I’ll kill my grandfather … and by the way Heather Graham was perfect, so it works out pefectly.”

The One About Gwyneth and Winona Ryder’s Coffee Table

Stern asked her about the longstanding rumor that Paltrow first noticed the script for “Shakespeare in Love,” which landed her an Academy Award at 26, on her then-friend Ryder’s coffee table.

“No, that’s an urban myth,” Paltrow said, raising her right hand, “I swear to God.” Stern wondered if Ryder believes as much, but Paltrow confessed, “I haven’t seen her in years.”

Brad Pitt was “too good for her”

“I think was just a kid, and I wasn’t ready when we met. He was too good for me,” Paltrow told Stern of the relationship with Pitt, which began in 1994. “I honestly think I was just too young, and I didn’t know what I was doing.”

“I was 22 when we met. It’s taken me until like 40 to get my head out of my ass,” Paltrow said. Her parents, actress Blythe Danner and the late director Bruce Paltrow, were devastated when the two split.

Ben Affleck Was a Different Story

Paltrow revealed she and Affleck met after her split from Pitt at a dinner thrown by then-Miramax honcho Harvey Weinstein.

“Harvey Weinstein, at the time, was trying to put all of his people in all of the movies,” Paltrow said, which is how she and Affleck wound up as co-stars for her Oscar-winning turn in “Shakespeare in Love.”

While she thought the actor intelligent and funny, she admitted he “wasn’t in a good place in his life to have a girlfriend.” No hard feelings though, as Paltrow says she’s still friendly with Ben and his wife Jennifer Garner, who she finds to be “beautiful and so warm.”

Stern expressed concern that Paltrow has only dated attractive men. “Go ugly next time, they’re so much more attentive,” he said.

“Dating tips,” Paltrow laughed. “For when I leave and go on Tinder.”

For clips from the full interview, visit Stern’s SoundCloud.

Robert Downey Jr. throws a wave to the cameras on his way into the El Capitan Theatre with his wife, Susan Downey
View In Gallery