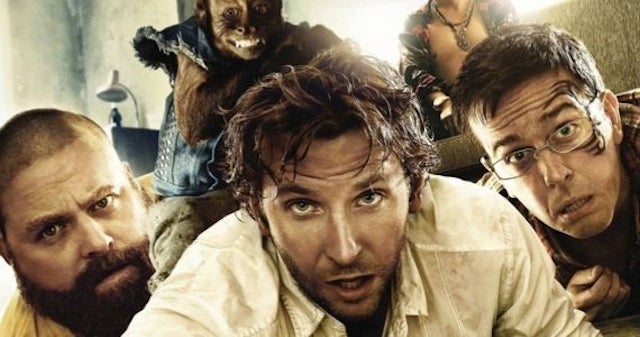 Years from now, doctoral candidates are likely to write entire extended theses on Alan Garner, the character so memorably and brilliantly played by Zach Galifianakis in the “Hangover” series.

This bearded baby-man — he’s a walking Chia Pet — is pure id, one of the most transgressive characters to ever pop up in a mainstream movie. He’s annoying, peculiar, perverse, prideful, cuddly and outrageously funny, all rolled into a single squat, hirsute package. Fortunately for “The Hangover Part III,” much of it is all about Alan. Returning fans will enjoy this raucous outing, though the fun peters out noticeably in the second half as the movie’s overly complicated plot drags on.

This latest chapter –supposedly the final one — in the blockbuster comedy series reunites the Wolf Pack. For those new to the series, that would be the quartet of mismatched male friends who find themselves, movie after movie, involved in wild and crazy adventures that often border on the illegal.

These BFFs are Phil (Bradley Cooper), the coolest and best-looking of the bunch; Stu (Ed Helms), a buttoned-down dentist who always has his worst fears realized in “Hangover” movies; Doug (Justin Bartha), a generic nice guy who has no discernable personality and is usually jettisoned early on in the proceedings; and Alan.

This third “Hangover,” set four years after the first 2009 film and two years after its 2011 sequel, begins with the 42-year-old Alan off his meds and still living at home, where he is the bane of his wealthy parents’ existence.  When his father (Jeffrey Tambor) kicks the bucket after a heart attack precipitated by yet another squabble with a recalcitrant Alan, it’s clear that the misbehaving non-prodigal son must change.

Doug, who is married to Alan’s sister, gathers the Wolf Pack and other family members to stage an intervention with Alan. This results in a road trip, with Phil, Stu and Doug escorting Alan to a medical facility, though their trip is interrupted when men in pig masks force their car off the road and take them prisoner.

This sets the movie’s plot in motion in a big way. Their capture was engineered by Marshall (John Goodman), a criminal big wig on the hunt for Leslie Chow (Ken Jeong, again one of the movie’s highlights), the crazed, drug-taking, gun-wielding gangster the Wolf Pack first encountered in the original “Hangover.”

Chow and Alan have remained friendly and, now that Chow has escaped from a Bangkok prison, Marshall wants to recover a $40-million plus fortune in gold ingots that Chow stole from him earlier. Marshall takes Doug hostage, telling the other Wolf Pack members that he will free their pal once they capture Chow and the gold for him.

The rest of the movie tells the convoluted tale of how the men track down Chow and the gold, a journey that takes them to Mexico and, eventually, neon-bright Las Vegas, the site of all their woes back in the original 2009 film. A lot of this, as capably directed by “Hangover” auteur Todd Phillips, is entertaining, especially when Alan is at the center of the shenanigans, but one’s interest in the overly busy plot wears thin by the end.

The movie’s single best scene involves Alan and a surly Las Vegas pawnshop clerk played by Melissa McCarthy. It’s instant attraction between these two social malefactors and their soulful locked gazes, as well as suggestive sharing of a lollipop, are a wonder to behold.

Despite McCarthy’s cameo, this “Hangover” continues the series’ pattern as being mostly an all-male affair. Wives pop up very briefly early on and Jade (Heather Graham), the hooker with a baby from the first film, returns for a couple scenes, but estrogen is in short supply here. (Note to self: Pitch script in which the women of  “Bridesmaids” pair off with the guys from “Hangover.”)

In their third outing, not surprisingly, the regulars mesh comfortably. It’s not as if Cooper, Helms or Bartha are particularly stretching or challenging themselves with their “Hangover” turns. Mostly, they simply set up the jokes, play along and then stand back to admire the ever-inventive Galifianakis at work.