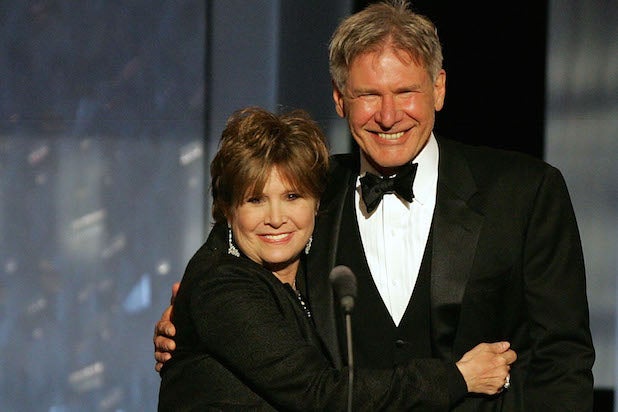 “Carrie was one-of-a-kind…brilliant, original.  Funny and emotionally fearless,” he said in a statement to TheWrap. “She lived her life, bravely…My thoughts are with her daughter Billie, her mother Debbie, her brother Todd, and her many friends. We will all miss her.”

Fisher died on Tuesday after suffering a cardiac arrest on board of a flight from London to Los Angeles on Dec. 23. After she was taken to UCLA Medical Center for emergency treatment, she was reported to be in stable condition over the weekend.

On Saturday, the actor also released a statement upon hearing of Fisher’s health emergency: “I’m shocked and saddened to hear the news about my dear friend. Our thoughts are with Carrie, her family and friends.”

In the “Star Wars” franchise, Fisher starred as Princess Leia while Ford played Han Solo. While they first met in the 1977 original, their romance was established in “Empire Strikes Back.” In a famous scene, before Han Solo got frozen in Carbonite, Leia famously said, “I love you,” to which he responded, “I know.”

Fisher recently released her memoir, “The Princess Diarist,” on Nov. 22. In time for the book’s release, the actress told People that she and Ford — who at the time was a married father of two — had a three-month romantic relationship while filming the sci-fi classic in 1976.

According to Fisher, the pair first spent the night together after director George Lucas’ birthday party.

Fisher later said she regretted revealing the affair, adding that it had been “a mistake.”