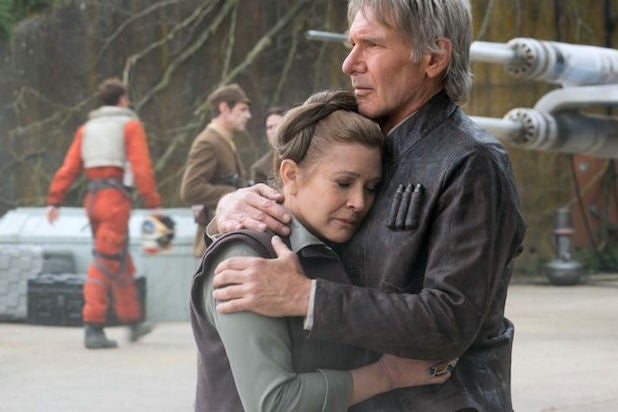 Harrison Ford is thinking of his “Star Wars” co-star Carrie Fisher this Christmas.

The Han Solo actor, who last appeared by her side on the big screen in 2015’s “Star Wars: The Force Awakens,” released a statement on the situation Saturday, joining Mark Hamill and a number of other Hollywood stars voicing their support for the iconic actress and screenwriter.

“I’m shocked and saddened to hear the news about my dear friend,” Ford said in a statement released to the media. “Our thoughts are with Carrie, her family and friends.”

Fisher, who most famously played princess-turned-general Leia in the “Star Wars” franchise, suffered a heart attack on a transatlantic flight Friday. Her brother, Todd Fisher, said that same day that she was “out of emergency” and in stable condition at the UCLA Medical Center, where she was transferred to the Intensive Care Unit, Todd told CNN late Friday.

Other “Star Wars” cast members, new and old, took to Twitter to react to the news.

Thoughts and prayers for our friend and everyone's favorite princess right now.. @carrieffisher

@carrieffisher The whole world is sending you so much love! Sending you the universes most powerful Force XXXXX❤❤❤

Los Angeles Fire Department spokesman Erik Scott told TheWrap on Friday after the incident that “at 12:11 p.m., the LAFD responded to LAX International Airport gate 74 for a patient on an inbound flight on cardiac arrest. Paramedics were standing by for the plane’s arrival and provided advanced life support and aggressively treated and transported patient to a nearby hospital.”

In a statement to TheWrap, United Airlines said, “Medical personnel met United flight 935 from London to Los Angeles upon arrival today after the crew reported that a passenger was unresponsive. Our thoughts are with our customer at this time and any requests for additional information should be directed to local authorities.”

Other passengers on the plane took to social media to confirm the passenger was indeed Fisher, the daughter of Hollywood couple Debbie Reynolds and Eddie Fisher.

I'm in complete shock. @AnnaAkana and I sat in front of Carrie Fisher on our flight from London and she was just taken off the plane by EMTs

Don't know how else to process this but Carrie Fisher stopped breathing on the flight home. Hope she's gonna be OK ????

Representatives for Fisher have not yet responded to TheWrap’s request for comment.