HBO’s thoughtful “Perry Mason” smoothly reimagined the titular gumshoe amid a 1930s Los Angeles backdrop but also smartly configured the women in his universe as a vital force in the narrative and in many cases set the various revelations in motion.

Perry’s (Matthew Rhys) dogged pursuit of the truth, with his sharp cohort Della (Juliet Rylance) by his side, is centered on a landmark child-kidnapping trial in which a young mother (Gayle Rankin) finds herself at the heart of a Los Angeles-based tug-of-war involving politicians, police and even a mother-daughter pair of evangelicals (Lili Taylor and Tatiana Maslany).

“Women didn’t have the same kind of luxury in this essentially man’s world of the 1930s and struggled to be taken seriously,” said series costumer designer Emma Potter, who also worked on the same network’s anthology series “True Detective,” a show with similar themes. “I remembered reading a news article where a woman had been arrested [in this era] for showing up to a court case as a witness wearing trousers. So, for us, it was fun to explore more of the parameters while staying very true to the period.” 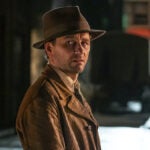 The end result was a mélange of styles, which Potter breaks down for TheWrap through the various looks of the series’ principal actresses:

Potter said: “Della’s backstory was that she came from a family that had money, but she made the decision to step away from the family and go out on her own to start work and pursue other things that interested her. And she had a working woman’s closet with maybe two or three coats that she is cycling through. Every other day we would repeat pieces, like sweaters or skirts and shoes. For us, the transition was taking her out of these more flouncy prints that you see early on and moving more into a silk blouse and a long wool skirt and allowing her clothing in a sense to start to feel a little bit more like suiting, inching her way to becoming a lawyer.” 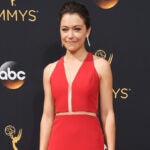 A charismatic preacher thrust into the spotlight of the kidnapping case, played by “Orphan Black” Emmy winner Maslany, was modeled in part by notable real-life evangelical Aimee Semple McPherson.

“The two things that had really stuck out to me about Aimee was that a lot of her gowns for the stage were made by people who did costumes in Hollywood,” Potter said. “So that’s why when you look at them, they really do look like these beautiful, luxurious, glowing silk gowns. There’s a sexuality and a power to Sister Alice on the stage, so we played with fluid, figure-hugging shapes. And then the other idea was that she felt kind of childlike in life – and to then have these soft, floral, delicate, silky prints when she’s alone.” 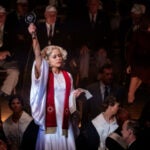 Also Read:
What Just Happened With the Baby on ‘Perry Mason’?

Birdy is the mother and keeper of Sister Alice while acting as her chief adviser for her elaborate stage endeavors. Birdy is as conservative as Alice is flashy and harbors quite a few secrets of her own.

“The idea was drawing the parallels between them,” offered Potter, noting the duo’s similar uses of lace and brooches within their clothing. “Even off the stage, Birdy is controlling Alice, and Alice had never really gotten away from Birdy, so she never had a chance to form herself. Her understanding of how to dress or what to wear is really dictated by what Birdy has taught her. Connecting the two of them in that regard kept them close together.”

The young mom who becomes embroiled in not only her child kidnapping investigation but also the affair that may have sparked it, Emily proves to be more than meets the eye, and her look becomes more sleek as the series progresses.

“I had always kind of seen Emily as a little sharper,” Potter told TheWrap. “When we started working with Gayle, we kind of realized that introducing those soft, worn-in blues and floral prints was a really nice contrast to her plaid, pale black and pink jail attire. But when you get to the court cases, she’s really being taken care of by Della and Sister Alice. So the idea was that she would have a few dresses purchased for her, and she could stop being seen as soft and delicate and start coming into her own a bit.”

“Perry Mason” is now available to stream on HBO Max