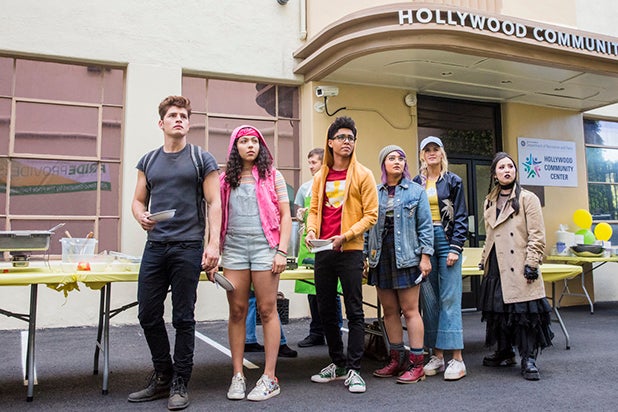 Hulu is out with its monthly list of everything coming and going. This December, new additions include Season 6 of “Younger,” two new episodes of “Into the Dark,” and Season 3 of “Marvel’s Runaways.”

According to Hulu’s description, here’s what’s going on in the the new season of “Younger”: “After Liza lands her dream job by posing as a millennial, she realizes that the truth is much better than fiction.” That’s out Dec. 3.

Season 3 of “Marvel’s Runaways,” in which the Runaways search for their captured friends, is out Dec. 13.

On Dec. 6, “Into The Dark: A Nasty Piece of Work” finds a mid-level employee at a big company faced with a challenge: in order to climb the corporate ladder, he must beat his co-worker in a violent competition.

On Dec. 27 comes “Into The Dark: Midnight Kiss,” which Hulu describes like this: “A group of longtime gay best friends and their resident fruit fly head to a beautiful desert home to celebrate New Year’s Eve. One of their annual traditions is to play Midnight Kiss, a sexy but ultimately dangerous challenge to find that special someone to help you ring in the New Year.  As friendships have grown strained with secrets, jealousy and resentment, the group faces another challenge when a sadistic killer wants in.  Relationships are put to the test and truths are revealed as the night turns into a fight for survival.”

Season 2 of “Killing Eve,” described by AMC as the story of “two women bound by a mutual obsession and one brutal act,” lands on Hulu on Dec. 18, and Season 1 of a Hulu original called “Reprisal,” described as a “hyper-noir story that follows a relentless femme fatale,” is out Dec. 6.

Also Read: Hulu in November: Here's Everything Coming and Going

Leaving the site after Dec. 31 are “American Beauty,” “Fatal Attraction,” “Requiem For a Dream” and “Saturday Night Fever,” among other films.

Here’s the complete list of everything coming and going on Hulu in December:

Into The Dark: A Nasty Piece of Work: Episode Premiere (Hulu Original)

Holidays with the Houghs: Special (NBC)

Live in Front of a Studio Audience: All in the Family and Good Times: Special (ABC)