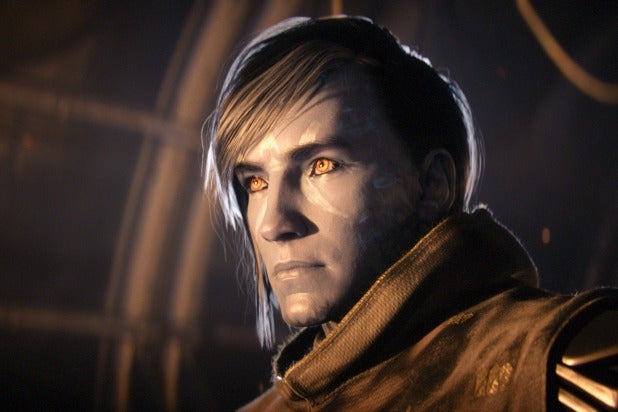 (Spoilers ahead for the last mission of the new “Destiny 2” expansion, “Forsaken”)

So if you’re a normal person playing through “Destiny 2: Forsaken” — a story that is mostly a grounded tale of revenge — that ending probably caught you totally by surprise.

You’ve finally hunted down almost everyone responsible for the death of your buddy Cayde-6, with only one to go — Uldren Sov, the Awoken prince of the Reef. But instead of fighting Uldren,  you do battle with a weird monster called the “Voice of Riven” that came out of a portal and ate Uldren. You kill it, but the portal remains open, providing a path to a place called the Dreaming City.

It’s a bizarre twist, and certainly almost impossible to follow if you aren’t steeped in “Destiny” lore, because this Riven has never been mentioned in the game before now. But we do actually have some details that should help clear this up.

Riven is an Ahamkara, which is basically a space dragon that grants wishes. There used to be Ahamkara in the solar system, but at some point in the past, Guardians eradicated them. But not all of them, because the Awoken Queen Mara Sov had one, which was captured as an infant and given to Mara by her brother, Uldren.

It turns out that Riven had been impersonating Mara and corrupting Uldren somehow to get him to open up the portal to the Dreaming City from our world — though that weird monster there was not Riven itself. We still don’t know what the point of all this is, but we do know that it is setting up the raid, The Last Wish, which launches on Sept. 14 and will presumably have Riven as its antagonist.

It does, in any case, appear that Riven accomplished its goal — which would seem to just be to open the portal.

Now, most of what we know about Riven and the Ahamkara — and the Awoken in general — comes from lore items and conversations in the Dreaming City, the new endgame questing area in “Destiny 2.” In the Dreaming City, Petra Venj calls up the actual Mara Sov (who is…somewhere else), and we learn through their chat that Uldren was “corrupted by the Taken” and that Riven was “taken” by the Taken when the Taken invaded the Reef three years ago during the events of “The Taken King.”

Riven is, thus, not the ultimate bad guy in this situation. If Riven is a Taken, then that means somebody else is pulling the strings with some unknown end in mind. That somebody else is most likely Savathun, Oryx’s sister. Over the past year, “Destiny 2” has been sprinkling in teases that Savathun is making some kind of move and may even have control of the Taken now that Oryx is gone.

Riven, meanwhile, has never really been teased at all, so it’s likely that all of this, including the raid, is setting up whatever Savathun’s big plot is. Though, the way “Destiny” operates, it may be a long time before we get to whatever that is. And in the meantime, we’re left with a million unanswered questions.

A fun bit of lore trivia: Savathun and the Hive appear to have dealt with Ahamkara in the past. In the Books of Sorrow lore items from “The Taken King,” Oryx tells about how he, Savathun and his other sister, Xivu Arath, invaded a group of planets orbiting a black hole that were inhabited by a race called the Harmony which had been visited by the Traveler. Oryx makes reference to the Harmony, in the face of the Hive invasion, consulting with “wish-dragons,” which almost certainly refers to the Ahamkara.

After wiping out the Harmony, Oryx, Savathun and Xivu Arath went their separate ways, with Savathun taking her portion of the Hive fleet and flying into the Harmony’s black hole.

For now, as is so often the case with “Destiny,” it’s really tough to tell where this is going.