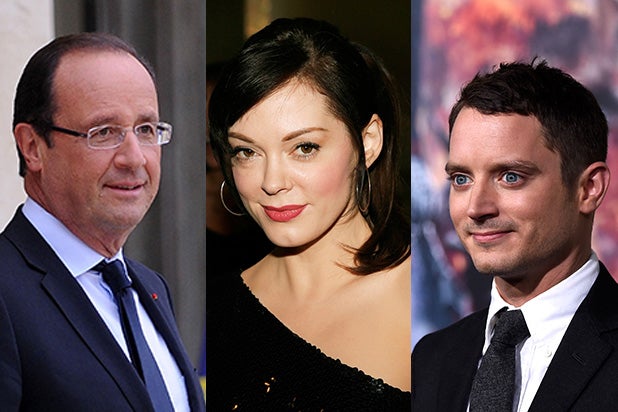 Just a few hours after gunman killed at least 12 people in a terrorist attack on the offices of the French satirical newspaper Charlie Hebdo on Wednesday morning, Twitter users started showing their support with the hashtag #JeSuisCharlie.

President Barack Obama issued a statement condemning the attacks on Wednesday, as did MPAA Chairman Chris Dodd, novelist Salman Rushdie and Russian President Vladimir Putin, while others took to social media with their grief and outrage.

See Photos: 18 Comedians Who Died Too Soon – From John Pinette to Gilda Radner

As of early Wednesday afternoon, the hashtag has already been tweeted out of 650,000 times.

Below are the rest of the notable Twitter reactions:

I am heartbroken by the loss of life and attack on freedom of expression. #JeSuisCharlie

At half mast for #France http://t.co/rhdaMLS6N1

My thoughts are with the victims and their families in Paris. #CharlieHebdo #JeSuisCharlie

I deleted a silly tweet because I've just read about the terrible events in Paris. #JeSuisCharlie

The murders in Paris are sickening. We stand with the French people in the fight against terror and defending the freedom of the press.

What a tremendous loss. A free press is our greatest weapon against tyranny, home and abroad. #JeSuisCharlie pic.twitter.com/QTytTkGT4b

Again, we are reminded of the need for a free and fearless press,of the raw courage of so many journalists around the world #JeSuisCharlie

Dear extremist nutjobs: if you truly believe your God is vengeful, then he will do all the work for you. Sit this one out. #JeSuisCharlie

The pen is mightier than the sword. #JeSuisCharlie

I'm a Muslim journalist. Although I disagree w/ anti-Islam cartoons, my faith compels me to respect the rights of others. #JeSuisCharlie

Despite misleading press reports, there are no plans to close the U.S. Embassy in Paris or other diplomatic facilities in France.

PM: We stand united with the French people in our opposition to all forms of terrorism & stand squarely for free speech and democracy #PMQs

PM: Angela Merkel and I met today. We are united in our condemnation of the horrific #Paris murders: http://t.co/45jjOoGTGl

French Prime Minsiter François Hollande’s tweet translates into “No barbaric act will never extinguish the freedom of the press. We are a united country.”

Ideas are more dangerous. RT @cog_ink: It's a hell of a time we live in, when men with guns feel threatened by men with a pen and a brush.

The French will not take this sitting down. Crowds forming in Paris in a demonstration of solidarity #JeSuisCharlie pic.twitter.com/6ujWYix7Ba