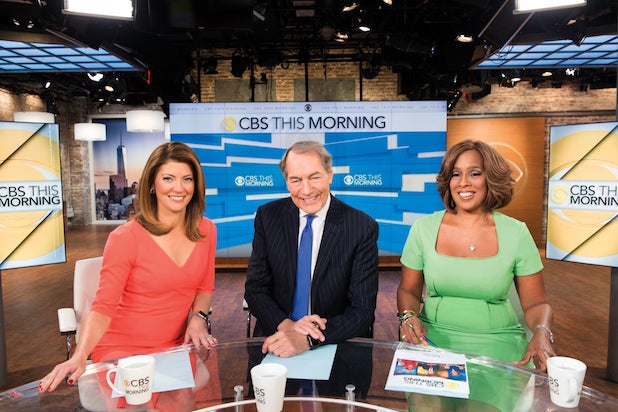 In the always-tight battle for supremacy in morning television, some of the best news right now comes from “CBS This Morning,” which has shown 41 consecutive months of growth, while its rivals continue to lose viewers on a monthly basis.

Yes, in February, ABC’s “Good Morning America” finished first among total viewers and NBC’s “Today” show won the key demographic of adults age 25-54. But “GMA” has now lost viewers for 22 straight months, while “Today” has been on a decline for 21 — and “CTM” inches closer to the pack.

This shift is due at least in part to “CBS This Morning” executive producer Chris Licht, who had a long-term plan for Charlie Rose, Gayle King and Norah O’Donnell when he launched the program in 2012.

Licht has been around the business long enough to know that it takes time for anchors to develop chemistry with each other and, once that happens, it takes viewers even longer to catch on.

But now, he told TheWrap, “I don’t think there is an anchor team in morning TV that genuinely clicks like Charlie, Gayle and Norah.” He continued, “That chemistry is a huge part of what’s working.”

Indeed, it’s about more than chemistry. Licht believes in delivering the news with informative interviews, perspective and analysis, which has resulted in a Peabody Award, two News & Documentary Emmys, one Daytime Emmy and an Alfred I. duPont-Columbia Award in just four years.

“Since we have gone on the air, we have not changed our mission, which is to be on brand with CBS News so that if you’re a fan of ’60 Minutes’ and ‘CBS Evening News,’ you will like what we do,” Licht said. “To do it in a way that works in morning television has always been our mission.”

Industry insiders used to joke that CBS hadn’t been relevant on weekday mornings since “Captain Kangaroo” ended its decades-long run in the 1980s.

In fourth-quarter 2015, “CTM” delivered CBS’ largest audience in the time period in 23 years. So far, things are looking up in 2016, too. During February sweeps, the network finished closer to NBC in viewers than it had in 22 years, dating all the way back to 1994, when CBS aired the Lillehammer Olympics.

Before joining CBS, Licht was the co-creator and executive producer of MSNBC’s “Morning Joe.” He has brought the same philosophy to “CTM,” sticking to news and staying away from the kinds of gimmicks that help boost the ratings of his rivals.