Honestly, I’d kinda forgotten what a landmark movie it was — “Flatliners,” that is.

Next year is its 20th anniversary, and what amazes me is that people still use the word as a noun, not a verb (as in, “He’s flatlining” … meaning all those monitors you see in TV shows are beeping and the patient is dying). Which is what writer Peter Filardi meant when he created the phrase in the 1989 script “Flatliners.” 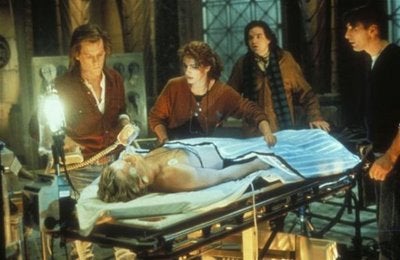 I know. I was the one who paid $450,000 for a script from a first-time writer, submitted from an unknown agent.

That subsequently led to a lawsuit that saw (now) legendary producer Scott Rudin being escorted virtually bodily from the Columbia lot.

Paramount ultimately tried to suborn the script for Rudin with, finally, infamous studio chief Michael Nathanson (what has happened to him since the Heidi Fleiss affair?) cautioning us that if Rudin contacted us, we were to immediately contact Columbia legal.

Who knows, in those days they might have taken him off to the South Sea islands, tied iron ankle bracelets around him and left for the sharks.

(Actually, it still does bother me that if you look at Scott Rudin’s resume, he claims credit for the film though he was banned from the set….)

What reminded me was a cover story this week in our local L.A. paper pointing out that, after throwing three touchdown passes last month over his former team, the Green Bay Packers, Minnesota quarterback Brett Favre sent a one-word message to his old coach, Steve Mariucci: “Flatliners.” He’d killed them.

Now, no telling how the NFL season is going to turn out — at the moment, Favre seems to be ahead — but what I find interesting is that a word made up by an unknown writer (Filardi had one TV episode credit on his resume) has, within two decades, passed into the lexicon. Trust me, you hear it on everything from “Grey’s Anatomy” to “House” … and it’s a completely made-up word from a movie!

The story begins when Nathanson was the president of production at Columbia Pictures under Dawn Steel. Dawn had just signed one of her favorites, Michael Douglas, to a major producing deal at the studio; Douglas (advised by CAA agent and now Universal Pictures head Ron Meyer) had hired former HBO president Rick Bieber as his partner and Rick (advised by my then girlfriend, “CSI” producer Cyndy Chvatal) had hired me to help him create the company Stonebridge Entertainment.

Later, we would produce everything from classic family fare like “Radio Flyer” to Brian Bosworth and Jean-Claude Van Damme movies (although we never put our names on those films!). But in the spring of 1989, we had just opened shop and no one knew what we were up to.

The only thing I knew was that Nathanson didn’t think we were moving fast enough — for the money he was paying Michael, Rick and myself, he expected product and by then, six months into our four-year contract, he didn’t think we were producing enough. (We’d actually produced one movie — a remake of “Heidi” starring Charlie Sheen as Peter. Can you imagine?!)

So early that year, I get a frantic phone call from Nathanson: There was some hot new script out there called “Flatliners.” He wanted us to get it, read it and make an offer if we liked it. Cool.

I contacted the small agency that was representing Filardi (again, remember, an unknown) and got a copy. We’d just hired a new creative exec named Nadine Schiff from NBC to help read scripts, so I gave it to her that evening.

The next morning, she walked into my office at 10 a.m. and suggested I read it myself. I shut my office door and began — and from the first sentence (ultimately uttered by Kiefer Sutherland), “Today is a good day to die,” I was hooked.

By noon I had it on Bieber’s desk and asked what he was doing for the next two hours. He said he was going to lunch. I said, “No you’re not. Cancel. You’re reading this.” He did, liked it as much as I did, and by the afternoon he, Nathanson and I were all in the bidding for this hot new project.

There are a thousand tales I could tell about how we went from that meeting to producing a No. 1 hit the following August (and the most profitable picture in a decade at Columbia Pictures) — including how Scott Rudin was thrown off the picture; how director Joel Shumacher truly made it his own (among other things, he was the one who found then-unknown Julia Roberts, a choice that probably made us an extra $50 million!); how we revived actor Kevin Bacon’s career (since he’d made the loser “The Big Picture” for the studio a year or so before, he’d been unemployable); etc.

But the real key is how, well, as William Goldman likes to say, in the movie biz, “Nobody knows anything.” In truth, we were all just taking our best chances — the studio in paying an inordinate sum for an unknown writer’s first movie; Joel for picking Julia Roberts (before “Pretty Woman"!), Rick and myself for fighting for Kevin Bacon (who went from being unemployable to starring in Oliver Stone’s “JFK” next!).

We also have to credit Columbia Pictures, which not only found the perfect weekend for us to open No. 1 and go on to box-office glory (with a budget of $15.9 million, we grossed more than $150 million at the box office alone, not counting video, cable, TV, etc.)

More importantly — and I was intimately involved in this — everyone from the studio on down wanted a new title. After all, they asked, what does “Flatliners” mean?

We commissioned study after study with numerous alternate names — “Karma,” “The Hand From the Past” and the like — and if I give credit to anyone, it is to Rick and I, who kept going to those marketing meetings and saying, “If it hadn’t been called ‘Flatliners’ in the beginning, would you have bought it?” (Probably Rick said that; I mostly sat behind him and encouraged….)

So you can imagine my shock when I pick up the Los Angeles Times on Sunday and see Brett Favre quoting our movie. “Flatliners,” a word made up by a screenwriter, encapsulated by producers and now a part of the language. And who says movies aren’t brain surgery?