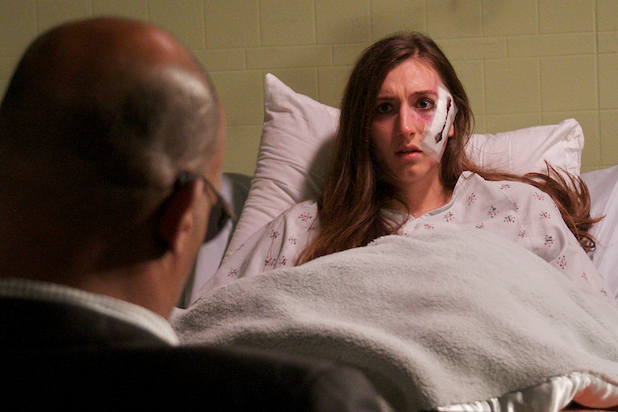 Everybody knows horror is hot. From major-studio releases like “Evil Dead” to tiny indie films like “V/H/S” that show up on Showtime after 10 p.m. or in the dregs of the video bins, they’ve become impossible to ignore.

Why so ubiquitous? They’re good business — easy to make (no expensive star or directors) and fit a formula, cutting the risk for producers. As Salon.com recently wrote “It’s not that they’re predictable: We like that. People in danger and running away. Blood … That’s why we go: Because we expect to get creeped out in certain ways … .”

That’s fine for the major studios. After all, they exist to make money, not art. If art happens — from “All Quiet on the Western Front” to “Argo” — it’s usually a happy accident. But what about independent films? They are supposed to be different, even horror films — more about vision than box-office.

As Salon writes: “The best horror films are slightly unpredictable. They stray from accepted monster, ghost, serial killer or torture porn storylines … .” That’s what indies have always done — break new ground … or at least heads. What’s the current rage for “found footage” films but an attempt to capitalize on “Blair Witch?” “World War Z” is but a “Night of the Living Dead” on steroids. And “Evil Dead?” Well, not only was this year’s $20 million version of Sam Raimi’s $90,000 original a “reboot” (as they call remakes these days), but like the original, which was followed by “Evil Dead II,” the reboot has launched its own reboot, “Evil Dead 2” (notice the subtle difference — from “II” to “2!”)

The sad part is that is now spreading to the indie world. Just stop by the infamous American Film Market this week at the Loews hotel in Santa Monica, ground zero for indie films. Understand, I have nothing against horror films. Truth in advertising, I’ve just made one — “Kill Her, Not Me,” a horror film with a twist: No “monster, ghost, serial killer or torture porn.” But back to AFM. I’ve been attending since I was a correspondent for Newsweek; I remember it larger — it was based at the Beverly Hilton with events around town. The opening gala for thousands was held at the giant Barker Hangar at Santa Monica Airport featuring an endless spread of free booze, caviar and jumbo shrimp. If there weren’t more distributors, there was at least more variety — for every Charles Band, who specialized in horror like the classic “Re-Animator,” you could count on Brad Krevoy selling a Barbarian Brothers movie, Cinetel sexy thrillers and upscale boutiques like Island Alive Academy Award-winners like “Kiss of the Spider Woman.”

Good times never last — as exhibitors opened more high-tech, Dolby equipped, 3D-capable theaters, they sucked the life from the mom-and-pop art houses that were the mainstays of the indies. Worse, the industry’s switch to low-cost DVDs and “digital distribution” meant that filmmakers of a even an indie hit no longer saw the millions brought in by every $90 cassette Blockbuster bought, but now share a much smaller percentage of the $4.99 you pay when you hit “On Demand” on your cable or satellite system.

The result? Today’s AFM is a leaner affair with even the major-studio specialty divisions having gone the way of Island Alive, October (“Killing Zoe”), Goldwyn (“Longtime Companion”) and the rest. In fact, in the same straightened circumstances, the surviving indies have resorted to the same formula — wander around Loews and I’ll wager half if not more of the offerings feature some version of a bodice-ripping, blood-spurting, knife or assault weapon-wielding fiend, human, alien or otherworldly.

And it’s not just us–for all the hype over the one or two great foreign films that make it to these shores every year, their distributors will largely be flogging the same fare: “Lift to Hell” (China); “Miss Zombie” (Japan); “Zombies from Outer Space” (Germany). In fact, horror is about the only genre an indie producer can raise funds for these days, in large part because it does sell foreign.

Horror “staples” — young girls, blood and boobs — are universal, of course. Moreover, a horror film can be dialed up or down depending upon audience: Scandinavia abhors violence? More boobs! Catholic countries can’t stand sex? Ramp up the blood! A smart filmmaker can have multiple cuts ready to go.

The premise — you never see the killer kill anyone; it’s all off-screen. Sure, there was a cabin in the woods and pretty coeds in bikinis. But trapping them there he explains he’ll kill them all unless they send forth one or another of their sorority “sisters.” The drama is how in a Stephen King-like frenzy they turn on each other, each betrayal or resentment rising to a capital offense. (Actually, there’s a whole other, completely surprising twist about what actually did happen in that cabin that weekend, but … .)

The Problem: The picture turned out better than expected. Now the filmmakers and performers are wondering why it has to be a “horror” film — why we can’t we just sell it as the “drama” it wants to be? They have a point — it really is a pretty good little movie. Literally the day we finished editing it, it won the Audience Award at the first film festival we entered; this weekend it’s the gala, closing night premiere at Los Angeles’ own RIP Horror Film Festival (www.RIPHorrorFest.com) Against my will I explain the film was financed by wealthy investors who care less — lured by the lurid profits mined at places like AFM, all they demanded was, as one put it, “four bare boobs and a bucket of blood!”

On the other hand, my “artists” have a point, too. They argue, justifiably, that the greatest horror film ever made, “Psycho,” has virtually no blood … and nary a boob in sight! Even a classic like “Halloween” would be mild today. Have the “Saw” and “Hostel” franchises (little more than “Criminal Minds” episodes with better prosthetics!) ruined it for more ambitious films, they wonder? But even as I urge them to head to the Loews this week to see what I’m up against, they won’t miss the delicious irony: Our leading lady, newcomer Elizabeth Guest’s aunt, ironically, is Jamie Lee Curtis, “Halloween”‘s Scream Queen, whose mother was Janet Leigh of “Psycho” fame. Despite that, I’m afraid I’m going to have to go back into the cutting room and cut in the “boobs and blood” the investors want. In that case, if anyone at AFM wants a last chance to see a truly unique film, the world’s first PG-13, female-friendly horror film before it’s eviscerated, just stop down at the Beach Auditorium Sunday night and mention this article. I’ll put you on the list.