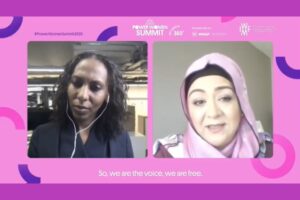 When it comes to the rise of cancel culture, “The Good Place” star Jameela Jamil thinks there are some positive aspects, but that it is vital that people separate “ignorance from evil” when it comes to who we as a society decide to forgive and who is beyond re-acceptance.

“I think it’s important to make sure that we are clear on the fact that there are some people who do irrevocable harm and they make the same mistakes repeatedly,” the I Weigh Community founder told Dr. Deepika Chopra, the founder of Things Are Looking Up, during a panel at TheWrap’s Power Women Summit. “We have to have boundaries for how many times you can overstep the line in a way that will actually harm or endanger a marginalized group.”

Jamil used “Harry Potter” author J.K. Rowling as an example of someone “who is just doubling down on harmful misinformation sometimes about a certain group,” following repeated backlash she has received for her comments about transgender people.

“I think in those instances — it’s not my place to decide to cancel anyone — but I think that she would have to do significant work and make significant amends in order to be able to be reaccepted by certain communities who stand against her values,” Jamil said. “Harvey Weinstein, all these kinds of different people — not to say that they are equal in their harm, I’m just giving examples of people who have done irrevocable harm.”

The actress says it is for this reason that it’s important to be “boundaried in the ways in which we decide who gets to accept and forgive whom.”

“But I definitely think that we also need to learn how to separate ignorance from evil,” she added.