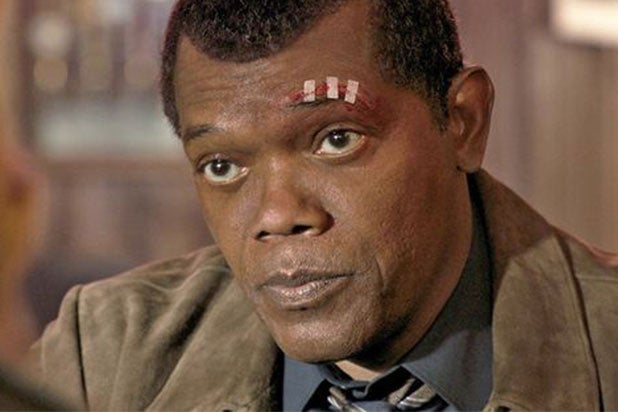 Samuel L. Jackson, who is 70 years old, was made to look 25 years younger as Nick Fury for the ’90s throwback movie “Captain Marvel.” And though the studio has previously de-aged Michael Douglas (“Ant-Man” films), Kurt Russell (“Guardians of the Galaxy Vol. 2”) and Robert Downey Jr. (“Captain America: Civil War”), the work on Jackson is the first time Marvel has done this for a co-lead actor for an entire movie.

De-aging is a meticulous, time-intensive process. Part of that process involves filming a body double that the visual effects artist can use as a reference. In making the leap between a handful to now hundreds of shots, Marvel tasked the company Lola Visual Effects to make some tests to see what Jackson could look like without the aid of a double. The payoff was enormous.

“That process works if you’ve got five, eight, maybe 10 shots. But in a movie like this where we’ve got about 500 shots, there was no way from a production point of view we could do that,” Christopher Townsend, Marvel’s visual effects supervisor on “Captain Marvel,” told TheWrap. “One of the big gains was Lola coming back to us and saying, ‘we don’t need the body double.’ That was huge for us because it cut down our shooting time by at least half.”

The end result in “Captain Marvel” is seamless, easily creating the illusion that Fury is far younger than the actor playing him. Townsend said that the goal was to always avoid the “uncanny valley” effect and to make Jackson’s youth look natural and unnoticeable.

“The thing I said to the gang at the beginning is from that first shot you see of Sam, you’ll go ‘Woah! Young Sam!’ But my intention was after that, nobody thinks about it,” Townsend said. “And hopefully that’s what we’ve achieved if we’ve done our job right, and that the audience never questions it and doesn’t even consider it.”

De-aging, or “youthening” as the VFX experts at Marvel also call it, requires repeatedly and painstakingly manipulating an individual frame of a movie to make an actor look younger.

Imagine trying to use Photoshop to make a model look thinner or younger on a magazine cover: you paint out any wrinkles, smooth the skin, fill in pores, bring in a person’s cheeks or chin, etc., but now do that frame by frame across a two-hour movie.

“The real challenge is making it so that there’s continuity from one frame to the next so that it feels smooth, and it never feels like the face is jiggling around or moving,” Townsend said. “It really comes down to the artistry of the person sitting there and trying to maintain as much of the original performance as possible.”

“You want every shot throughout the whole movie to look like Sam, and specifically to look like Sam at that age. So when you’re working with hundreds of shots and dozens of artists, it would be really easy for each of these shots to go off in their own direction and every shot looking like a different person,” Trent Claus, visual effects supervisor with Lola, added. “So you have to be very strict with consistency and internal reviews and things like that to maintain that continuity.”

Claus helped pioneer the de-aging process with “The Curious Case of Benjamin Button” and in creating the “Skinny Steve” effect in the first “Captain America” movie, in which Chris Evans was slimmed down at its start, a precursor to the technique used today. But he said that it’s a “misconception” that the technology itself has changed or evolved drastically in the last 10 years. What has improved is their experience and knowledge of the physiology of the human body and face.

With the absence of a body double, the visual effects artists looked to ’90s Jackson classics like “The Negotiator,” “Die Hard: With a Vengeance,” “Jurassic Park” and smaller films like “Sphere” and “One Eight Seven.” As VFX artists might also do with a body double, they’re looking for a model for how light reflects on his face or how his cheek might sag when he strikes a similar expression to one used in “Captain Marvel.”

Claus, however, said that the challenge of working with someone who has “aged very well” like Jackson is actually a “double-edged sword.”

“If we simply just wipe off the wrinkles from someone, that can immediately take 10, 15 years off them,” Claus said. “But if you’re working with someone like Sam, who really doesn’t have a whole lot of wrinkles, you really have to rely on physiological changes, changes in structure of musculature, textures of skin, the way the weight hangs on your neck and your jaw, things over time like that we’ve studied for so many years now.”

Townsend said the goal is always to maintain as much of the performance as possible, to manipulate the image without destroying the original photography. Smooth out too much, and you lose the nuances of the actor’s performance but also end up with unnatural, plastic-y looking skin.

And in striving for realism and understanding the human face, Claus says what they do is much more than photoshopping.

“We don’t want to remove all the imperfections. We don’t want to make them look more perfect than an actual human does. We want to keep all of that pore texture, whiskers, and all of those things that it would be easier for us to just eliminate,” Claus said. “It would be far easier for us to just obliterate all the detail on someone’s face. But then you end up with that mannequin, uncanny valley thing that we all try to avoid.”

The question that remains is how Marvel will use this technology in the future, or what it means for upcoming movies from other filmmakers. Martin Scorsese is planning to de-age Robert De Niro and Al Pacino for “The Irishman,” and Ang Lee is de-aging Will Smith for “Gemini Man.” Claus says that on future projects, using a body double is still ideal. But considering the scope of projects like “The Irishman” and “Gemini Man,” the VFX teams on those films may look to take Lola’s lead.

Townsend isn’t sure of the specific techniques that Scorsese and Netflix are utilizing but says that the process is the same and reiterated that the goal is always to do the most you can to fully capture the actor’s performance and get out of the way of the story.

“De-aging, youthening, any actor that has had a prolific career, brings advantages and disadvantages,” Townsend said. “There is plenty of onscreen reference from which to draw, but equally, there will be many experts out there critiquing the work and comparing it directly with the younger actor.”